THE DILEMMA FOR PENSIONERS AND WHAT GOVERNMENT CAN DO ABOUT IT 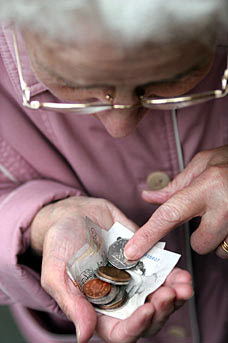 One hundred and four years ago and thanks to a Welsh Chancellor of the Exchequer, the British Government granted the first pensions to its citizens who, when David Lloyd George was in charge of the nation's finances, had to be men of ‘good character’ over the age of 70 who had not been in the workhouse.

Since then, all of us have become eligible for a state pension when we reach retirement age but are our older generation better off?

Ironically, perhaps, the five shillings paid out in 1909 was, according to pensioners support groups, equivalent to 25 per cent of the average earnings. Compare that to the situation today where the state pension is equivalent to only 17 per cent of an individual’s average pay.

In such a situation, it is probably not surprising to find that many pensioners are now going back to work to supplement what they get from the state.

The latest data showed that in the last three years, the numbers of adults aged sixty-five years or older who are in employment in Wales has increased by 28 per cent and currently account for 60 per cent of the increase in employment for the period 2009-2012.

Other factors have also probably influenced this trend.

First of all, it is clear that pensioners are not getting much from their savings as, thanks to the lowest interest rates in history, the interest on savings accumulated throughout a lifetime of hard work is currently at a record low.

Secondly, for those lucky enough to have private pensions, the actual value of pension funds have fallen dramatically, meaning that many will have to wait until the stock market recovers to get any decent return on their retirement income.

Finally, an increasing number still have to pay off debts with a recent report showing that one in five pensioners are in the red on the day they retire, owing an average of £31,000. In fact, hundreds of thousands of pounds are still outstanding on interest-only mortgages due to the fact that many endowments, thanks to the recent financial crisis, simply failed to deliver the returns promised.

In addition, the insurance company Prudential estimated recently that people planning to retire this year expect to be living off the lowest average incomes recorded in six years, with those retirees being expected to be around £3,400 a year worse off than workers who retired in 2008.

However, it is those on the basic state pension of £110.15 per week who face the biggest challenges, especially in paying basic bills. Indeed, it is worth noting that whereas the average annual spend on gas and electricity for the over-65s was an average of £669 in 2005, it had risen soared to £1,356 last year, representing nearly a quarter of what they get from the state pension.

Given this, is it really surprising that many are facing a difficult choice between going hungry and keeping warm, resulting in greater incidences of cold-related illnesses?

We are supposed to be living in a civilised advanced economy and yet in 2012, there were over 20,000 excess winter deaths of older people in the UK, higher than in any other European country.

One can only imagine the horror of the figures that will be released after the bitterly cold spring we are currently experiencing.

And with Wales having a higher proportion of older people than the rest of the UK, the situation is probably even worse here. Indeed, it is estimated that over 100,000 pensioners in Wales will have turned turning off their central heating during the recent cold spell.

Perhaps the answer with this annual problem lies with using the ability of the public sector as a purchaser. For example, if the UK and Assembly Governments examined how they could ensure discounted purchases of electricity and gas, then both could provide these services at a vastly reduced rate for those receiving the state pension.

Given that all governments of the last fifty years seem to have conveniently ignored this issue, such a solution to deliver a ‘pensioners’ tariff’ would ensure that politicians, rather than spouting the usual empty rhetoric about the importance of looking after the older generation in our society, actually acted and used the massive purchasing power of Government to do something positive that will improve the standard of living of those who need it the most.