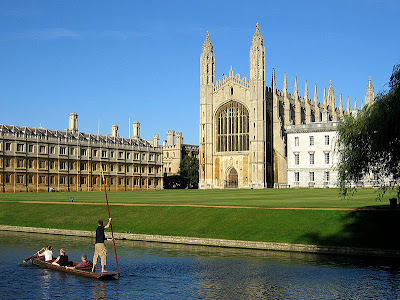 As regular readers of this blog are aware, I am a passionate advocate of having universities as catalysts for enterprise and innovation in the Welsh economy.

Indeed, much of my own professional career over the last twenty years has focused on trying to identify and develop the best instruments for driving forward change in these areas.

That is why I was very interested in the publication of a recent report which, by examining the world's most highly regarded universities in entrepreneurship and knowledge transfer, attempted to identify the key factors needed for an enterprise ecosystem in which higher education played a major role.

As would be expected, some of these relate directly to the strategy of the higher education institution itself, and most experts interviewed for the report cited a strong institutional enterprise and innovation culture within the university as an essential ingredient of a successful local ecosystem.

Of course, it is not unexpected to find both Stanford University and the Massachusetts Institute of Technology (MIT) in the USA used as examples where enterprise and innovation was "sown into the fabric of the universities from their very foundation" but is also worth noting that there were a number of UK institutions mentioned as a result of the considerable change that has been taking place in the British higher education system during over the last few years.

One example is one of our great institutions, the University of Cambridge. Despite being over 800 years old, it has overcome its traditional academic focus to create an  unexpected entrepreneurial culture. This has been achieved by celebrating enterprising faculty role models, encouraging a relatively unstructured mix of innovation activities across campus, and giving faculty the freedom to devote time to entrepreneurial ideas.

The role of those at the top of the university was also seen as pivotal in sowing the seeds of a strong enterprise culture within the institution as without such leadership, changes rarely happen. In just eight years, Imperial College London was changed by Sir Richard Sykes, formerly CEO of the pharmaceutical giant GlaxoSmithKline, into a powerhouse for academic entrepreneurship. Not only did he transform the technology transfer office into a coherent vehicle for commercialisation across the university but, in doing so, encouraged world-class researchers to become entrepreneurs.

But it is not only university staff that are critical for ensuring changes within the institution. Equally important is the role of student-led entrepreneurship activities that, in many cases, create an environment in which enterprise can thrive.

In Finland, the newly created Aalto University has, in just over three years, established an incredibly powerful engagement by its student population in enterprise and innovation activities. These are supported by resources such as the "Start Up Sauna" incubator on campus and the annual SLUSH conference, which brings together early-stage startups to meet top-tier venture capitalists and media from around the world. In 2012, SLUSH gathered more than 3.500 attendees, 550 companies and 250 investors and journalists for two days in Helsinki, an incredible achievement for a university.

Various external factors are also important in encouraging a more innovative local ecosystem. In particular, the local quality of life is a key issue for attracting and retaining academics as well as entrepreneurs and investors.

In France, the area of Sophia Antipolis has managed, through creating a technology park on a wonderful green field site, to take "the Silicon Valley summery lifestyle and setting it up in the south of France”. And as economic development planners in Wales should take note, this success has also been helped by a strong tourism industry that made the region “open to the world”, an international airport and high-speed train lines to the rest of Europe.

Finally, many of the best universities in the world of enterprise and innovation have not done so alone and have benefited from considerable external support from local and regional governments, usually through generous financial grants. However, what seems to be most important in maximising such a relationship is openness between government and higher education in working to together to achieve similar goals.

In Russia, a Siberian university managed to combine its own facilities with those of the city and local businesses so that all three actors benefited and contributed to the enterprise ecosystem.

Certainly there are lessons there for Welsh universities in working alongside councils and businesses in developing local facilities that benefit the whole community.

Whilst some may say that the ecosystems in Silicon Valley and other innovation hotspots where entrepreneurial university flourish may be hard to replicate in more disadvantaged areas such as Wales, the report does show that an increasing number of successful institutions were to be found in more challenging economic environments. These universities had, despite their location, managed to overcome an internal culture that did not support entrepreneurial behaviour and risk-taking, a lack of venture capital or multi-national companies in the region and a limited local market.

Therefore, with Welsh higher education in Wales facing specific challenges as a result of new configurations, reorganisation and alliances, university leaders and educational policymakers could do worse than learn from some of these examples globally and ensure that their institutions not only stimulate enterprise and innovation internally but play a major role in driving forward their local economies.