THE CONSTRUCTION SECTOR - A BOOST NOW WOULD HELP THE WELSH ECONOMY 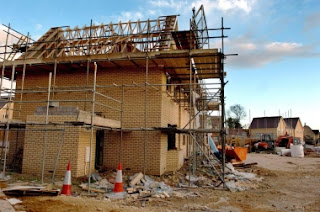 Last week, there was genuine surprise amongst most economists when it was announced that the UK economy had grown by 0.3 per cent in the first three months of 2013.

Many doomsayers had been talking down the prospects of growth and had predicted that we would fall into an unprecedented ‘triple dip recession’. Clearly that did not happen and we can now hope that this can be built upon over the rest of the year and that businesses and consumers will start feeling more positive about future prospects.

However, it is worth noting that this growth was driven solely by an increase in the service sector, with manufacturing and construction contracting over the period.

A high value added manufacturing industry is important to a competitive economy and therefore the lack of growth by Britain’s factories is worrying. However, given that around half of all exports are to the still depressed eurozone, this continuing decline should not be too surprising.

Many will continue to be dismayed that construction industry declined in the first three months of this year after a short-lived recovery at the end of 2012.

The fall of 2.5 per cent in the sector’s GDP demonstrates that much remains to be done to ensure that it remains one of the key levers for future economic growth across the UK, as suggested by the Chancellor in his recent budget. Indeed, it is estimated that if construction output had just remained flat rather than declining, UK GDP would have increased by 0.5 per cent.

Therefore, the industry still requires stimulus and support to ensure further expansion over the next few years. That is why it was somewhat puzzling that the Welsh Government recently stopped its plans for a new scheme to help homebuyers in Wales.

At a time when banks are reluctant to lend, NewBuy would have enabled anyone wanting to buy a new house or flat up to a value of £250,000 to do so with just a five per cent deposit. More importantly for the construction sector in Wales, it would have supported the building of 3,000 new homes.

One of the reasons put forward for not going ahead with this programme in June as originally planned was that, following the announcement of a similar scheme from the UK government, the housing industry in Wales had withdrawn support.

Yet is that really the case?

On the day that this was announced, I was sitting in a BBC Wales studio with the managing director of Redrow South Wales.

He was adamant that, in contrast to statements that had emerged from Cardiff Bay earlier that day, Welsh builders were in fact fully supportive of the NEWBuy scheme and that it was a total surprise that it had been scrapped.

In fact, given that the similar UK scheme was not starting until 2014, it was critical for the building industry that something was available for the rest of the year so to not only incentivise more housebuilding but also to get more first time buyers into the market and boost consumer confidence.
Redrow insist that they, and other housebuilders, still want NEWBuy to start in June and with research estimating that over 14,000 new homes are required every year in Wales for the next fifteen years, the general consensus is that it cannot start soon enough.

Indeed, such a misunderstanding could have serious consequences for the sector going forward and one can only hope that the Welsh Government will now make the effort to meet with representatives of the House Builders Federation as soon as possible to sort this out.

Certainly, something must be done quickly to boost the prospects for a construction sector that could and should be making a more significant contribution in delivering economic recovery.