GETTING TO KNOW YOU - ENTREPRENEURS AND THEIR INFLUENCE ON GROWTH BUSINESSES 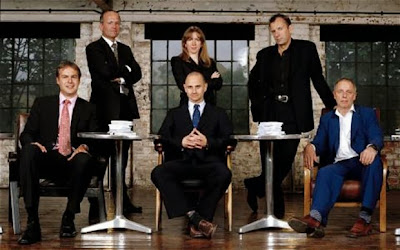 In November, Wales will once again be taking part in the Global Entrepreneurship Week, a series of events to publicise and promote entrepreneurship as a viable career option, with an estimated 7.5 million people participating in 130 countries around the World.

But is this enough to make a real difference to encourage more people to take the step into an entrepreneurial career? It is a sentiment that seems to be reflected in a groundmaking paper from the World’s foremost think tank on entrepreneurship.

Researchers at the Kauffman Foundation, based in Kansas, USA, has stated that more needs to be done to expose the general population to entrepreneurs, especially those entrepreneurs that grow their businesses.

Indeed, research has consistently shown that a small number of businesses create the majority of jobs in an economy – the latest Fast Growth 50 project saw the creation of over two and a half thousand jobs in Wales in just two years by fifty businesses. So the question is whether greater exposure to entrepreneurs will lead to others doing the same?

Certainly, in conversations with those running their own businesses, a common thread in terms of their motivations is a description of the role models and peers - all usually entrepreneurs - who played a role in their decision to take the plunge and start a new venture Therefore to understand this better, Kauffman undertook a survey of US residents. This showed that not only did a large number of U.S. residents know entrepreneurs, but that knowing an entrepreneur is possibly a significant factor in whether a person runs their own business. 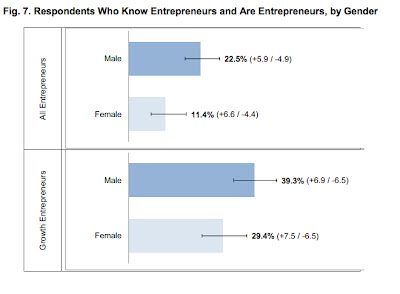 More importantly, the survey indicated that the likelihood of knowing entrepreneurs varied widely by location, income, gender, and age. For example, respondents were much more likely to know entrepreneurs if they were male, had modest income, or were middle-aged. This is a critical finding for policymakers in determining how best to encourage further entrepreneurship not only amongst those who are thinking of starting a business but, more importantly, amongst those who are in business already but have not considered growth as part of their strategy.

More relevantly, the finding suggests that there could be an increase in entrepreneurial behaviour amongst some under-represented groups such as women or ethnic minorities, if they were exposed to existing entrepreneurs, especially peers or contemporaries. For example, women simply don’t know as many growth entrepreneurs as men do, a situation made worse by the male-dominated nature of these fields and an important issue in creating female entrepreneurial role models. 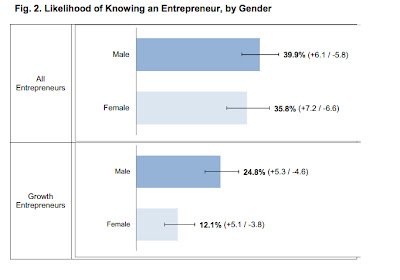 Certainly, we have seen very few businesses managed by women within the Fast Growth 50 project during the last fifteen years and it is an area that needs urgent attention to ensure that there is breakthrough not only in getting more women to start their own businesses but those that grow and create jobs in the economy.

In addition, people in lower income groups are also much less likely to be exposed to those growing their business, a finding that should have particular resonance in ensuring that there is a greater focus on promoting entrepreneurship in areas such as North West Wales, which is one of the poorest parts of Europe.

Therefore, whilst governments around the World focus on various initiatives to promote entrepreneurship, the Kauffman study suggest that perhaps the best way forward is simply helping people to get to know who are the wealth creators in their local economy. In particular, more needs to be done to expose potential and existing entrepreneurs to those growing their businesses within the Welsh economy so that they not only serve as role models, but lessons can be learnt from their experiences.
Entrepreneurship growth firms Kauffman