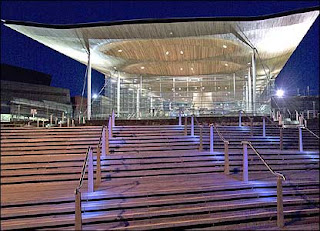 Earlier this week, I gave a speech at the Parliament for Wales debate at the National Eisteddfod to discuss how further powers could affect the business community.

However, it would seem that certain sections of the Welsh Assembly Government have taken umbrage at some of the reported comments from the speech, even though none of them were actually at the event. Of course, it is easy to take such comments out of context so I am taking this opportunity to set the record straight.

Let me make my position absolutely unequivocal. In general, I believe that the argument that full powers for the Assembly along the lines of the Scottish Parliament would not help Wales is no longer valid.

However, the real issue for the economy, which must be addressed by detailed research, is how further powers can make Wales a more attractive business environment for both inward investors and indigenous businesses. Indeed, I believe that a more radical Assembly Government, with increased devolved powers, could use full legislative powers to boost investment and profitability.

This would certainly be an improvement on the current settlement where economic development policy in Wales is straitjacketed by having only one real instrument – grants to business – as the means of making any real difference to the economy.

More relevantly, if businesses, and the agencies who support them, have to fill in a small rainforest of paperwork to access funds, then what is the point of such a system?

To date, there has been little examination by policymakers of the impact of new legislative powers on the Welsh economy, and it is about time that a cost- benefit analysis is undertaken of the effect of additional powers, taking into account the benefit for Welsh businesses.

In my opinion, we have waited too long to examine the effect of greater legislative powers on economic and enterprise development, and I was extremely disappointed that this was not discussed in any real depth during the inquiry by the Richard Commission into further powers for the Assembly.

I believe the time has now come to have an honest debate to thoroughly re-examine the whole issue of the additional powers that can create competitive advantage for Welsh businesses, as opposed to grants that do little to support long-term investment.

I exhort Sir Emyr Parry Jones and his committee to examine this issue in more detail.

For example, the Assembly Government has failed to introduce a business rate relief scheme that is anywhere as supportive as similar schemes in both England and Scotland, despite considerable promises by one of the coalition partners before the election.

Many businesses are still paying far higher rates of business tax than they did two years ago. Simply put, Welsh businesses are short-changed relative to their Scottish and English counterparts at a time when our entrepreneurs need as much support as they can get.

Of course, we don’t need further powers to change business rates as it could be done tomorrow by the Cabinet in Cardiff Bay. It is a mechanism that is relatively simple to implement and can positively affect thousands of firms without any undue bureaucracy.

At a time when the credit crunch is hitting many small firms across Wales, the Assembly Government could ensure parity with England immediately over the rate relief scheme and assist small businesses at a time when they need it the most.

Rather than giving businesses government handouts via a maze of bureaucracy, why doesn’t the Assembly give money back in the form of business rate reductions?

As the Economic Development Minister rightly said before the last Assembly election, cuts in business rates would see 50,000 small businesses taken out of the business rates net. This is a real improvement which would benefit small businesses without an increase in bureaucracy. Cutting these rates will help indigenous companies and will make Wales more attractive to business.

My message to the Assembly Government is clear.

If used properly, further devolved powers can help create a prosperous and competitive Welsh economy with policies that really do make a difference to both home-grown and inward investing businesses.

To do this, it must ensure that the business community is fully on board as it is probably the one sector that is most sceptical over further powers for the current body.

If that can be done, then the rest is relatively easy.