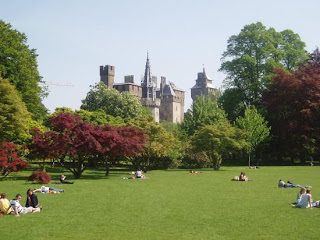 According to last night's South Wales Echo, Cardiff Council intend to desecrate one of its historic landmarks by building a new road access for lorries into Bute Park in Cardiff.

Professor Kevin Morgan of Cardiff University, one of the world's leading figures on regional development, has rightly condemned this scheme. He said

"I am furious about this. I find it astonishing that the council, which is supposed to safeguard the interests of Cardiff, could be so arrogant and foolish as to go ahead with such a scheme.

I am trying to organise a debate here in the university about this. It’s a big issue. Cardiff likes to project itself as one of the leading cities in Britain in terms of sustainability, husbanding its resources, and caring for the well-being of its citizens. To build a road into Bute Park, Cardiff’s greatest asset, to facilitate the entry of articulated lorries is the complete antithesis of that philosophy.

Old ways of measuring cities like GDP and population size are from another century.

Nowadays, people think in terms of quality of life, and having green spaces is an absolutely vital element of that. Yet there are still those in senior positions who think solely in terms of the commercial elements of a city. Not long ago a planning director came to give a talk at the university. He never once mentioned sustainability.

But in terms of making a city attractive and a desirable place to be, you can’t trump Mother Nature. All right, with urban parks like Bute Park you are talking about cultivated nature, but what we have in Cardiff is a great asset to be nurtured, not something to be jettisoned or messed with.

We get a lot of students from overseas in the department, mainly from China and India. Every year I ask them at the end of their time here what are the best and the worst things about Cardiff. Every year, they speak very positively about our urban parks, by which they mainly mean Bute Park. It’s the number one comment they make. They greatly appreciate it as a place of tranquillity, where they can get away from the busy life of the city streets.

We are told that building the road will make it easier for big events to be organised in the park. It seems the park is being seen primarily as a venue for visitor attractions. But the main point of Bute Park is its value in the lives of the people of Cardiff. If visitors appreciate it too, that’s fine, but it mustn’t become simply a tourist attraction. Every encroachment on to the park is a blow to the quality of life of the people who live here. It is astonishing that the guardians of our civic heritage could even contemplate doing what they have done.

I don’t think the councillors who decided to approve this scheme have thought the matter through properly at all. I know that planning permission has been granted, but I would like them to think again. I intend to invite the council cabinet member responsible, Nigel Howells, to take part in a public debate. So far as I’m concerned, this isn’t over yet. It won’t be over until it’s over."


I find it incredible that the council is acting in this way and I hope that everyone with any influence in Cardiff and Wales will join Kev in speaking up against this vandalism.