Singapore - lessons for the Welsh economy? 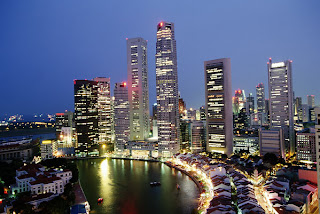 Having recently returned from Singapore, I have time to reflect on developments within this unique country and whether there are in any lessons for the Welsh economy?

I have not visited the country for 17 years, and it has changed dramatically during that time and has developed a reputation for economic growth in key areas of technology and innovation. However, it would seem that not even Singapore is immune to the current turmoil enveloping the global economy.

Just as I was touching down in Changi Airport, economists were dramatically revising their predictions for the Singaporean economy which, instead of the expected 4.6% growth in 2009 would now contract by 1.1% instead.

Why has this happened so quickly? The challenge is one that many countries would be envious of, namely the existence of a highly-successful, export-based economy which, with a slowdown in spending across the world, is finding demand for its exported goods reducing.

Indeed, Singapore’s ratio of exports to wealth is more than 180%, compared to around 70% for the rest of the Far East region.

While the pain will be sharp for the Singaporean economy, it may also be relatively short with economic growth forecast to bounce back to 4.2% in 2010.

However, what is encouraging for the Singaporean economy is that large technology-based firms continue to see this small country of 4.5 million as the place in which to invest for the future.

For example, Cisco has just announced that it will invest £20m into creating a new technology centre which will develop services for an ultra-high-speed broadband platform.

With government support, this centre is expected to create around 1,800 new information technology jobs by 2015 and generate up to £300m into the Singaporean economy.

Certainly, there are lessons here for Welsh policymakers in that there remain many companies which are still willing to invest substantial resources into future projects if they are supported in the right way.

Wales – with its smaller government and access to additional billions of European funding – could and should be attracting companies such as Cisco to consider investment here for the European market. It would be an absolute tragedy if, through lack of action and opportunity, we were to lose out on any similar investment in the future at a time when the Welsh economy needs it more than ever.

What other lessons can be derived from this Asian Tiger economy as it enters a slowdown?

As discussed in this column on a number of occasions, a number of Singaporean analysts are now arguing that companies should be supporting increased training for their workers during the recession to ensure that there is improved labour productivity in the future.

The Singaporean Government has recently announced that it will invest £250m to retrain workers across a range of industries.

Despite its links to the oil industry, the Singapore Government has also decided to focus on developing the clean energy sector as a strategic growth industry, with the aim of generating 7,000 jobs by 2015.

To do so, it has pledged around £300m to support research, development and technology in the sector and, more importantly, to attract major global players to Singapore.

If the Welsh Assembly Government is truly serious about its sustainability agenda, then it needs to think beyond the construction of windfarms, both onshore and offshore, across Wales.

Instead, it needs to focus on attracting and developing the next generation of clean and renewable technologies in solar, tidal and energy efficiency so that we have a major presence in this area over the next decade.

Finally, it is clear that education is still perceived as the main driving force behind the future prosperity of Singapore and it is a lesson that we in Wales forget at our peril.

While the funding gap between Welsh and English universities continues to grow, it is worth noting that the Singapore Government is not only looking to substantially increase its annual higher education budget, but is also creating a new institution to ensure that Singapore’s university sector is well-positioned to “serve both the needs of the economy and the aspirations of its young people in the years to come”.

It is a vital lesson that policymakers in Wales should reflect upon as they try to create a sustainable economic strategy for the future.