Digby Jones - was he right? 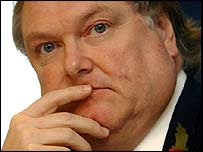 Last week’s decision by Anglesey Aluminium to stop smelting at their plant in Holyhead, with the loss of 500 jobs, will have been met by enormous disappointment by everyone on the island, which is already the poorest county in the UK.

However, many will be shocked that we have reached this situation, despite considerable warnings over the last two years that this would happen if the plant did not get access to an energy source.

Incredibly, this is probably the only company in the UK that is not shedding jobs because of the current credit crisis but because of a power issue that has been flagged up by the company to politicians on numerous occasions. Yet little seems to have been done to deal with this problem and Anglesey faces the disaster of losing millions of pounds more to the local economy.

So what has gone wrong?

Surely you would have expected politicians and officials, within both the Assembly and the British Governments, to have come up with a plan to ensure that a major employer such as Anglesey Aluminium would continue to operate, especially during a recession where every job is vital for the local economy.

Part of the answer can probably be found in the response by Lord Digby Jones last week to MPs on the Public Administration Committee.

Recently replaced by Wales’ greatest living banker, Merfyn Davies, the former Trade Minister did not pull his punches. In his own inimitable style, said that the civil service had fostered a culture where officials were obsessed by box-ticking and looking after their own jobs.

"So many people in the civil service are far more interested in process than they are in outcome. They pay lip service to outcome because they have targets to meet, boxes to tick”. In a forthright statement, he said that when he worked with civil servants who were not up to the job, "they were just moved sideways and they would go off to another department. That is something that the taxpayer does not deserve".

As expected, these claims have been vehemently denied by the civil service unions and given his rumbustious style, perhaps Lord Jones was not the best person to point these issues out.

As with all things, the truth probably falls between two stools. Whilst I have come across many civil servants whose obsession for detail and micromanagement and would turn Job into a raving lunatic, I have also had the privilege of knowing those who passionately believe in Wales and will go the extra mile to ensure the best for Welsh business.

You have to wonder whether the situation could be improved, especially during the current recession.

Perhaps the most constructive thing that Assembly Ministers can do is to have a quiet word with those who are slowing down the whole process. They should guarantee that support and funding is provided to businesses as quickly and efficiently as possible, especially as there is increasing evidence that this just isn’t happening.

For example, you have to wonder why a number of major projects in North Wales that were submitted for millions of pounds of European funding nearly fourteen months ago are still nowhere near being approved and at a time when it is critical we spend the money.

Over the next few months, safeguarding every job is vital and taxpayers have a right to expect that their hard earned money is used efficiently and effectively for the benefit of the nation.

They should also expect that governments, and their civil servants, do everything possible to ensure that, during the current recession, businesses are fully supported and vital jobs are safeguarded, especially within the poorest parts of this nation.