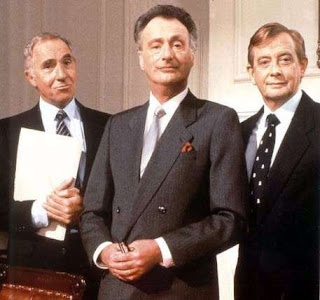 "Even in boom times there’s a lot to be said for being a civil servant. Many of them do exceedingly interesting things, if you like the idea of running the economy or protecting the environment. And they’re powerful. They tell individuals and companies how to behave. Politicians occasionally try to interfere, but ministers are ill-informed and easily distracted so do not much disturb civil servants’ lives".

"The power of civil servants is increasing, too. As this newspaper reported last week, the government’s share of the economy is growing. In the northeast the figure is 66%, compared with 54% when Labour came to power. Thanks to the economic crisis, that's going to rise still further. Near-nationalisation of the financial system means civil servants will control the banks and will poke their sticky fingers into every industry that the politicians bail out."

The bit about politicians being distracted and ill-informed is probably the most disturbing aspect of this comment as it rings all so true here in Wales.

For example, I was told that, at a high level meeting last week, a middle ranking civil servant stated, quite categorically, that it was up to her, and not the Minister, to decide which projects were supported.

You wonder sometimes why we need politicians!