Damian McBride and those emails - the full details revealed 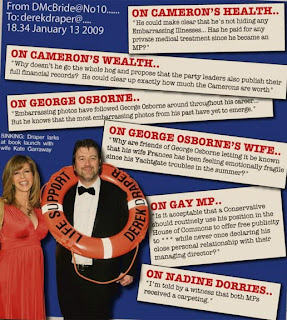 After yesterday's events of high drama, today sees the News of the World finally publishing the full details of the emails which were set to smear top Conservative politicians.

Whilst Damian McBride has fallen on his sword, his departure has only intensified speculation regarding the degree to which others in No 10 Downing St knew about this smear campaign.

There is an increasing stink of desperation around this government and its supporters, in which 'attack' seems to be the only strategy available to the Labour Party.

You only have to look at the new Aneurin Glyndwr website to see this trend growing in Wales - devoid of any ideas or policies and focusing solely on attacking other parties through gossip and character assassination.

It shows how far a once great political movement has fallen.

More on this tomorrow.