- April 13, 2009
Over the weekend, we saw the beginning of what could be the dirtiest election campaign of modern times.

Unless you are living on Mars, you will probably be aware that Damian McBride, one of Gordon Brown's senior officials (below with the PM) sent emails which discussed the smearing of Conservative politicians through obscene innuendo. 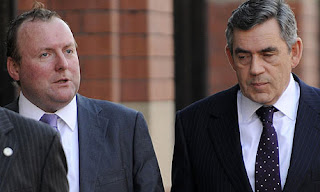 He was forced to resign although it remains unclear how many others within the heart of Government knew about this plan.

Those not involved in politics will wonder why individuals would resort to personal insults when it should be the policies that matter.

Having been at the receiving end of such behaviour as a political candidate, I can tell you that it is not pleasant although what I experienced was nothing compared to what was planned for David Cameron, George Osborne and their families.

During the last election campaign, I had to instigate legal action against a prominent local academic (and previously a candidate for another political party) who was spreading lies about me.

I also had unsavoury comments about my family posted on my website which were well beyond any normal political debate.

Even the Daily Post itself received a letter, ghoulishly using a local undertaker’s address, which questioned my qualifications and academic credentials.

You expect a bit of knockabout in politics but having worked so hard over so many years in my professional career, I did begin to wonder why people bother to put themselves through the election process only to receive such personal abuse from cowards who clearly would never say such things to your face.

Some would argue that the growing use of the internet has been responsible for the increase in such behaviour.

On the other hand, as the Obama presidential campaign showed last year, the internet can also be a positive tool for invigorating supporters and attracting new voters.

In Wales, there has been a growing internet presence by politicians, although the Labour Party has been slow in getting its act together.

That is probably why Labour luminaries such as Peter Hain and Eluned Morgan recently set up their own website called Aneurin Glyndwr which was allegedly inspired by the Obama campaign.
Its first communication piece was a video using the Tom Jones song Delihah to criticise Plaid Cymru and the Conservatives.

It was widely ridiculed and subsequent posts have set a largely unsavoury tone of mainly attacking political opponents rather than focusing on their own party’s policies.

What is most surprising is that they are trying to play the ‘toff’ card with regard to David Cameron after this tactic failed miserably at the Crewe and Nantwich by-election which was won by the Conservatives.

Political commentators are at a loss to understand why Labour are resurrecting such ‘class war’ politics at a time when voters are generally turned off by such comments and given that Tony Blair, their most successful leader, was himself educated privately at Fettes independent school in Edinburgh (popularly known as the Eton of Scotland).

There is a new politics emerging across the world that and in resorting to such tactics, the Labour Party is in danger of being stuck in a world of spin, innuendo and smear.

This was best demonstrated in a recent speech by the wife of the politician who supposedly inspired this new Labour website.

Speaking to schoolchildren in London, Michelle Obama said that "Whether you come from a council estate or a country estate, your success will be determined by your own confidence and fortitude. We are counting on you, we are counting on every single one of you to be the best that you can be."

If it wants to survive in the 21st century, then the Labour Party would do well to remember that, especially on the internet.