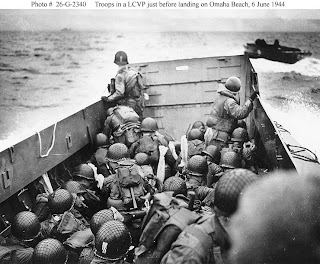 Over last weekend, the remaining few gathered in France to commemorate the 65th anniversary of the D-Day landings.

As this was a poignant reminder of the events that turned the outcome of the Second World War, many will have been disappointed by the snub from the French Government to Her Majesty the Queen, who herself served in the forces during the war.

By not inviting the Head of State of the United Kingdom, President Sarkozy has been accused of demoting our country’s sacrifices in liberating his own and, worse still, of seemingly basing his entire history of the Normandy landings on the film “Saving Private Ryan” in order to curry favour with his American guests.

Of course, no-one should deny that American troops played a major role in the D-Day landings and that thousands lost their lives to liberate France. However, it is a sad day when a major European statesman, for his own political ends, deliberately understates the role played by the British and the Canadians.

Worst of all, it would seem that the British Government has contributed to the snub by the French President, by initially stating that the 65th anniversary was not sufficiently significant to support properly and then backtracking furiously to ensure that a member of the Royal family was invited after the public furore surrounding the Queen’s omission from the invitation list.

In doing so, our politicians have unwittingly acquiesced to the rewriting of history by Hollywood and by European politicians who are more than happy to downplay the role played by British troops.

The facts, of course, paint a different picture.

Whilst two of the five landing beaches were American (Omaha and Utah), the other three beaches, namely Gold, Juno and Sword, were allocated to the British Second Army (which included the Canadian 3rd Division). The five non-American divisions (four British and one Canadian) also contributed more troops to the campaign than the five American divisions which took part.

Significantly, the critical support needed to ensure that the landings were successful came mainly from British forces, including reconnaissance by commandoes of the beaches and landing sites, the bombing of strategic targets by the RAF, and the attacking of German ships in the English Channel by the Royal Navy. Finally, and most importantly, both the Royal Navy and the Merchant Navy supplied the ships which carried the invasion force over to France, including those to the American landing sites.

Indeed, my own grandfather served on the SS Amsterdam which supported the D-Day landings on Omaha beach by being one of the ships which delivered the landing crafts and their American troops to the coast (see picture above).

Once that task was completed, the SS Amsterdam was refitted as a hospital ship to be able to take the thousands of wounded out of France and back to Southampton for treatment.

However, on August 7th 1944, on the way back to Britain with a full load of wounded troops, the ship struck a mine and went down in under 8 minutes with the loss of 106 lives, including that of my grandfather. Here is an account of its sinking by one of its young crew, which I only discovered last week.

Whilst President Sarkozy should hang his head in shame for turning this moving ceremony into a roadshow for his own personal political benefit, our own Government, allegedly so complicit by doing nothing to deal with this diplomatic gaffe, must now ensure that it never happens again, and ensure that every future remembrance ceremony must include our Head of State to represent those who gave so much to ensure the freedom of Europe.

The thousands of British servicemen and merchant seamen who died during the summer of 1944 in securing those beaches deserve no less.