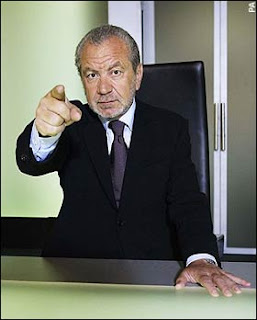 It would seem that Sir Alan Sugar may be regretting his hasty decision to 'join' the UK Government as their enterprise championczar as it emerges that the BBC is now examining whether he should continue as the star of the Apprentice.

With the next series due to start in March 2010 - two months before the likely date of the General Election if Brown survives - it would clearly be a breach of the so-called "impartiality" of the BBC if such a prominent supporter of the Government was given airtime.

I don't think Sir Alan has thought this through properly, a trait for which he would probably be fired for in his own series.

If you had a choice between being the host of one the BBC's most popular programmes or being a bit part player in a failing government, which one would you choose?

Anyway, perhaps it is time for Sir Alan to hand over to someone else as the format is becoming slightly tired.

Potential successors could be Sir Stelios Haji-Ioannou (Easyjet), Jacqueline Gold (Ann Summers) or even Sir James Dyson (who may well get the contestants to something more constructive and enterprising).

However, my vote for anew host would go to Michael O' Leary of RyanAir - if he can treat his passengers in the way that he does, imagine how he would treat the poor contestants? Now that would be a TV programme I wouldn't want to miss.

p.s. I would hardly call it on the same scale, but on a personal note, I was essentially banned by BBC Wales from acting as an academic or business commentator when I was selected as a candidate in 2006. Prior to that, I was probably doing commentary for both Welsh and English TV and radio two to three times per month. Oh well, that's politics!