The Ashes in Cardiff 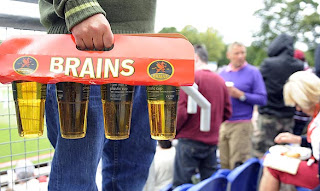 Having been walking past Sophia Gardens for the last three days and hearing the shouts of the Barmy Army echo across the Taff, I am finally going to see the Ashes Test Match today although, typically, rain is promised.

It is still an amazing thought to think that the first Ashes Test match between England and Australia has been held here in Cardiff and not in Lords, Old Trafford or any of the other traditional test grounds around the country.

Of course, the exposure for Wales as a result of the test match has been tremendous and a welcome boost for Cardiff business at a time of recession. Some of the local firms have done tremendous businesses with pubs and restaurants reporting over 200 breakfasts every morning for supporters!

Whilst, there are estimates that the Sophia Garden development could generate £80 million for the Welsh economy during the next five years, the real fact is that millions of people who didn't know about Wales will have had a highly favourable view of the capital city and the local people.

In particular, the world's largest group of middle class consumers - the cricket mad Indians - will probably have seen the fantastic scenes from the camera on the BetFair blimp above the ground.

This has provided a spectacular bird's eye view of the beauty of the city's parks, Cardiff castle, and the walk down to the Millennium Stadium with Cardiff Bay in the background. What we need now is for a massive follow-up campaign to the Indian sub-continent to attract tourists to Wales as a result of this sporting event.

If the rain does come today, the match will probably peter out into a draw but whatever happens, Wales is most definitely the winner in this first Ashes Test match.