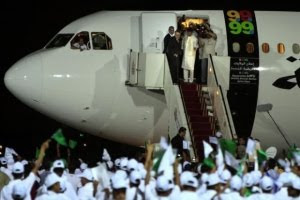 The Daily Mirror has just published a story which alleges that Tony Blair did a deal with Libya that allowed for the return of the Lockerbie bomber in exchange for trade and oil.

It would seem that despite attempts by the UK Government to say little on the affair, this is whole issue is going to run and run and that it may be the final straw that breaks this Government.

As a Times article indicates, there remain a number of unanswered questions including:

To those I would add the following:

This whole affair is becoming murkier by the minute and the fact that Libya's Sovereign Fund has decided to open offices in London in a deal allegdly brokered by Lord Mandelson raises even more questions about the UK Government's role and their willingness to jeopardise our diplomatic relationship with one of our staunchest allies for a couple of oil contracts.