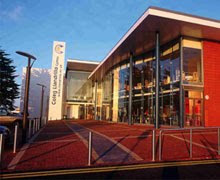 Last week, I wrote about the importance of higher education to the Welsh economy.

However, it must be remembered that the main providers of post 16 education in Wales are not universities, but further education colleges.

Currently, twenty five further education colleges and institutions offer 80 per cent of all post-16 qualifications in Wales, with nearly 300,000 learners undertaking courses every year. Unlike universities, the majority of learners in further education are studying part-time, with many also working within businesses whilst studying for a qualification.

More importantly, the quality of learning within Welsh Further Education colleges is consistently shown to be far higher than that for colleges in England, giving Wales a real advantage in the provision of skills and learning to the business community.

Given the vital role of the further education sector in ensuring that the economy continues to develop the skills necessary to take it out of recession, it is disappointing that, for some strange reason, the Welsh Assembly Government has not adequately funded the sector.

For example, in January, fourteen further education colleges received news that their funding allocation was to be cut by £7 million, and it was only after protests outside the Assembly Building in April that this decision was effectively reversed and an additional £9 million was provided for the sector.

However, this increase meant that there was essentially no overall investment in those colleges which faced cuts in January despite the fact that this was a time when further education was needed more than ever to provide the training necessary to not only get people back to work, but to maintain the skills necessary for a competitive economy. Indeed, the additional amount will just about cover the pay increase of 2.3 per cent which the Assembly Government has instructed colleges to pay its staff.

In the face of this financial uncertainty, a number of further education colleges have been forced to make cuts in courses and jobs at a time when they can ill afford to. For example, Pembrokeshire College announced that it is cutting 9,555 hours from its course provision in 2009-10, whilst Bridgend College has cut all its full time A-level courses from September. In addition, Gorseinon College in Swansea is cutting adult learner courses, Yale College in Wrexham is ending some A-level and Learndirect courses, and Barry College has extended its overtime ban on staff, held vacancies and delayed replacing staff.

One would have thought that during a period when youth unemployment is at its highest for nearly twenty years, policymakers would make it an absolute priority to ensure that young people in Wales are not abandoned during the worst recession since the Second World War. Indeed, they should be making every effort possible to make sure that those aged between 16 and 24 are given the skills that will be needed by Welsh employers in the future.

Rather than consigning young people to the scrapheap of economic inactivity, we should be ensuring that real funding is provided for further education colleges to develop the next generation of skilled workers with industry relevant qualifications that can make a real difference to the Welsh economy.

Of course, the conundrum is whether, under the current declining state of public finances, we can afford to spend the money on skills? The simple answer is that we cannot afford not to and our nation’s workforce should not be left behind when the recession ends.

The irony of this situation is that whilst the rest of the UK is suffering from public sector cuts, there have been substantial amounts of additional funding available from European Structural Funds for the last two and a half years. Despite the fact that 40 per cent of this £2 billion fund has been earmarked for skills development, there has yet to be any substantial project awarded to support the further education sector in Wales. With a little more strategic thinking, many of the financial problems that the sector is facing could have been avoided by using European funding to support many of the industry-oriented courses that further education colleges offer.

Politicians are fond of using statements such as “the Learning Country” to describe the Welsh nation but whilst such rhetoric may play well in Cardiff Bay, it would seem to many that education is simply not perceived as a high enough priority in developing the competitive advantage of this nation. That is a real tragedy as a properly funded post 16 education sector could provide a real difference to the Welsh economy, especially if there were closing working relationships between higher and further education.

A former President of Harvard University once said that “If you think education is expensive, try ignorance”. In the post-recessionary world of the next decade, it will be those nations that invest in skills and education that will stand out and succeed.

In Wales, universities and colleges need to be supported properly to provide the skills that will enable our industries to compete with the best in the world. If that means that we need to divert more money from other budgets - such as business development or transport - to ensure that this happens, then that may well be the bitter pill we need to swallow to ensure that Wales has the skilled workforce necessary to become a truly competitive economy.