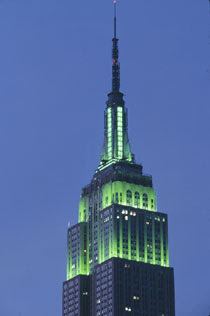 I have been fortunate to spend the last week in the USA as part of a delegation to New York and Boston to examine the development of the so-called cleantech sector on the East Coast of America.

Organised by UK Trade International (UKTI), it gave a detailed insight into how serious the Americans are about not only tackling climate change but in building a whole new industry for the 21st century.

For those of you unfamiliar with the cleantech sector, it comprises of knowledge-based products or services that improve operational performance, productivity, or efficiency while reducing costs, inputs, energy consumption, waste, or pollution.

Only last month, a survey of business executives by the UK Government found that cleantech is estimated to become the fastest growing sector in the UK by 2020.

Globally, analysts predict that the current world market for cleantech products and services will grow to around a trillion pounds by 2017 over the next decade, with more than one-third attributable to renewable energy sources, such as biofuels, solar, tidal, and wind power.

To date, much of the focus on cleantech within the UK has been on power generation, with windfarms at the forefront of development to create sustainable sources of energy. Gwynt y Mor, one of the largest offshore wind farms in the World - is currently being constructed off the coast of North Wales.

However, many will be surprised to learn, as I did, that there is actually not one offshore wind farm anywhere in the USA, despite the recent efforts of some developers. Indeed, billions of dollars of investment is currently being spent on energy efficiency, especially in ‘retrofitting’ existing buildings with energy saving devices.

Having met with representatives from New York State, New Jersey and Pennsylvania, it was both fascinating and enlightening to hear them compete against each other to demonstrate their green credentials, which is partly the result of the promise by President Obama to invest $15 billion every year over the next decade in renewable energy to create five million new jobs

For example, New York State’s Governor has pledged to have 45 per cent of all its energy its electricity needs through improved energy efficiency and clean energy by 2015 whilst New Jersey has a plan to have 30 per cent of its power from renewable sources by 2020. All three states highlighted the fact that they were ‘open for business’ to work with any cleantech company and there are certainly real opportunities for Welsh businesses operating in the green sector.

What really impressed me during the visit was the way the Big Apple itself had bought into the whole concept of green business. This was best demonstrated by the fact that the city of New York’s commitment to long term sustainable development has been personally led by the Mayor, Michael Bloomberg.

His “PLANYC” strategy aims to make the city ready for the challenges faced by climate change and to develop actions to deal with this. For example, he has created the largest municipal fleet of alternative fuel vehicles in the USA, including more than 3,300 hybrids for uses such as police cars to Parks Department vehicles in the aim to reduce all of New York's greenhouse gas emissions by 30 per cent by 2030.

This follows other high profile schemes such as the MillionTreesNYC initiative to plant trees in public spaces and the development of a framework for reusing thousands of acres of brownfield sites across the city to provide affordable housing, generate jobs and usable open space.

In particular, there has been a drive to attract green entrepreneurs’ to the city, with seventy five different programmes available to provide funding to new and existing businesses in the sector, to support clean energy generation and promote green technology development. These range from tax credits to the owners of buildings which meet certain energy efficiency standards, funding of up to £1 million for companies to develop or expand facilities which produce renewable or green products, and cash incentives for the installation of new solar energy systems.

Therefore, it would seem that there is a serious intent by government at a city, state and federal level to reduce the effects of climate change in the USA whilst, at the same time, developing a brand new industry that will create wealth and employment.

Whilst it has become fashionable to talk about green jobs, American politicians are matching their rhetoric with real action to support the cleantech sector and, as I have seen for myself over the last few days, they are taking this issue seriously on the East Coast of USA with government interventions that would be unheard of in this country.

We certainly have much to learn from our American cousins if we are to develop green businesses as a key part of the future development of the UK and Welsh economies.