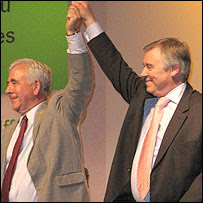 Having just returned from the USA, I have managed to catch up with some of the blog entries in wales, many of which (given their political colours) discuss the Plaid Cymru conference in Llandudno.

Of particular interest is the entry by Bethan Jenkins on Ieuan Wyn Jones's speech at the conference this afternoon, where he again goes after his a regular theme of attacking financial institutions and saying that, under the Conservatives, "Fat cats and banks will be alright".

Of course, a few miles down the road is Bangor Business School, where I worked for four years. When I arrived in 2000, one of the first things I did was to establish an advisory board, very much on the model that I had seen during my days at the Michael Smurfit School of Business at UCD in Ireland.

During my time, the board was stocked with entrepreneurs such as Henry Engelhardt of Admiral Insurance, Malcolm Walker of Iceland and enterprise academics such as Professors Allan Gibb and Sara Carter.

Of course, entrepreneurship is no longer important at the university since I left and the board has now rightly changed its focus and recruited individuals from banks whom Ieuan would naturally recognise as 'fat cats'.

These include Lord Merfyn Davies of Standard Chartered Bank, Dyfrig John of HSBC and Sir Peter Davis (a main board director of UBS AG of Zurich - Europe 's largest bank by assets).

However, they are exactly the high flying board members that an institution such as Bangor Business School needs given its expertise in banking and finance but, unfortunately, they are also the type of individual that certain Welsh politicians are quick to criticise in order to appease the party faithful at the annual conference.

Given this slur on those bankers who support the local business school, perhaps the Chairman of the Advisory Board will now write to the leader of Plaid Cymru to remind him of the importance of the banking sector to the UK economy. However, as that person is none other than Dafydd Wigley, the Honorary President of Plaid Cymru, I think that the devil will be wearing iceskates before that happens.