IS THE UK ECONOMY FINALLY ON THE ROAD TO RECOVERY? 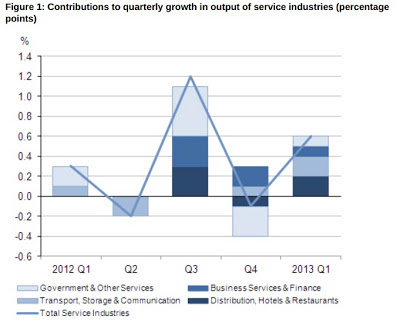 Earlier this week, officials from the International Monetary Fund (IMF) arrived in London to undertake their annual review of the UK economy.

And there will be renewed optimism from the UK Government about the state of the economy, following the better than expected GDP growth figures for the first quarter of 2013, which confounded most economic commentators, many of whom had predicted no growth or even a slide into an unprecedented triple recession.

The question, of course, is whether this growth can continue after what can only be kindly described as a flat period for the nation? Certainly, recent data seems to suggest that the increase in GDP may not be a one-off and that we can look forward to a period of sustained growth in the immediate future.

According to the National Institute for Economic and Social Research, the UK economy grew by 0.8 per cent in the three months to the end of April. This follows a report from the accountancy body ICAEW that suggested business confidence was improving amongst firms and the second quarter of this year would see a growth in the economy of 0.6 per cent.

Of course, the dilemma for the UK Government is that it ideally needs all cylinders within its economic engine to be firing simultaneously to push forward growth.

For example, the services sector grew at twice the rate of the UK economy during the first three months of the year and seems set to expand further during the rest of the year. Yet depressingly for those wanting further growth, the other two important sectors, manufacturing and construction, both showed a decline during that period.

However, the latest data on output from the Office for National Statistics shows that factory output actually grew by 1.1 per cent in March following a further increase of 0.7 per cent in February, the first time since 2011 that manufacturing had grown.

And this recovery seems to be one that may finally be sustainable - a survey from Zurich Insurance showed that more than three quarters of Britain’s manufacturers are more optimistic about their industry than they were a year ago.

The disappointment remains the construction sector, which has declined by 2.5 per cent in quarter 1 of 2013. Given this, increased government incentives for infrastructure development and new housing cannot come quickly enough for the industry. However, there seems to be some glimmer of hope that it may be turning the corner and the Construction Purchasing Managers' Index rose from 47.2 in March to 49.4 in April. Whilst this indicator is still below the 50 level that indicates growth, it is better than most analysts expected.

So there are some mixed messages across the three main sectors but is there any good news from other indicators seems to suggest that the UK recovery is back on track?

Advertising spending, which is normally seen as a leading indicator of economic vitality, rose to £17.2 Billion in 2012, the highest level since 2007. More importantly, it is set to grow by a further 7.7 per cent over the next two years not only through online advertising but also through traditional media such as TV and national newspapers.

Another positive indicator was a forecast that house sales are predicted to grow by 7.5 per cent this year, with a million transactions to be completed, the highest level in six years. Confidence is also returning to the buy-to-let market, with 33,500 mortgages worth £4.2bn completed in the first three months of 2013, £500m higher than in the same period of 2012.

But perhaps the most important indicator for the economy is that of consumer confidence, which still remains fragile within the UK despite these more positive economic figures.

Indeed, a recent survey showed that the percentage of those with no spare cash once they have covered essential living costs has leapt from 22 per cent to 30 per cent, reaching its highest level since the second quarter of 2011. Another survey from Deloitte showed that even those with income are cautious about spending on holidays, short breaks and going out. For example, trends for booking holidays in the first quarter of this year showed that whilst 13 per cent spent more than in the previous quarter, 21 per cent of consumers actually spent less.

Yet, this seems to be compounded by data on the most expensive purchase that many people will make after their house. According to the latest figures, car sales in the UK are nine per cent higher in first four months of 2013, with sales to private individuals up by a third compared with April last year.

Therefore, there is some good news out there after months of doom and gloom over the UK economy and it will be interesting to see what the bean counters from the IMF make of the nation’s future prospects after their visit.

Certainly, one swallow does not make a summer and until we see further growth in the next few quarters, then the jury is out on whether we are finally beginning to emerge from the recent recession. We can only hope that the recent increase in GDP will finally bring back confidence over the next few months to both consumers and businesses.

That has been the magic sauce that has been largely missing during the last five years, and if this optimism does grow, then expect the UK economy to follow suit during 2013.