WALES CAN LEAD THE WAY IN PUBLIC SECTOR INNOVATION 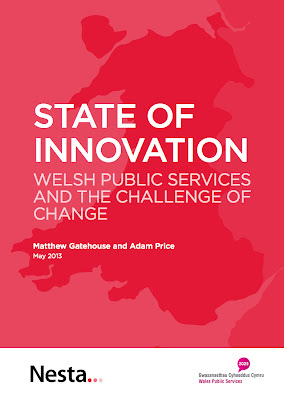 Last week, a report was published that, woefully, received little attention from the Welsh media but could, if implemented, have a transformational effect on the way that public services are delivered here in Wales.

Funded by NESTA, 'State of Innovation: Wales Public Services and the Challenge of Change' should be compulsory reading for every senior manager within government and the public sector in Wales. Authored by Matthew Gatehouse and Adam Price, the facts from the report were startling.


More than two thirds of our economic output comes from the public sector, a situation that is compounded by low private sector productivity, which means Wales remains the poorest part of the UK.

Nearly a fifth of the Welsh population is aged over 65, which is a higher proportion than the UK as a whole, putting pressure on an already stretched health and social care system that will only increase as life expectancy improves.

Pockets of Wales, especially in postindustrial areas, have some of the worse health of any parts of the UK, with 27 per cent of economic inactivity due to long-term sickness.  In addition, we also have higher comparative levels of child poverty.

Whilst in the past, governments have dealt with such issues by merely throwing money at them in the good times, that scenario is now at an end. Welfare spending is set to fall dramatically over the next few years and the funding that the Welsh Government receives from the Treasury will continue to reduce.

In the past, such government cuts have been accepted with largely a shrug of the shoulders, some industrial action but then a quiet acquiescence that we might as well accept it as there is little that can be done ‘in the current circumstances’.

However, this report blows that comfortable complacency out of the water by showing that stronger and healthier communities can be created if we embrace greater innovation within the public sector.

And we already have some strengths in place.

According to the report, Wales is big enough to scale beyond the purely local but small enough to organise a coherent national strategy.

Indeed, a radical programme of transformational change is possible because of this “Wales effect” i.e. the common sense of belonging, the strong personal relationships between the main players, the much shorter communication distances between national government and local delivery, and close connections between policymakers, practitioners and academic institutions.

This natural advantage, along with a dominant public sector, a strong academic base and close communities, means that there is a real opportunity for Wales to become a global leader in public service innovation.

And it is not that we are beginning from scratch.

There are already several cases of excellence of innovation within public services in Wales, including the “Your County Your Way” strategy led by Monmouthshire County Council; Time Banking Wales which is transforming local engagement in the South Wales Valleys; and the Gwent Frailty project which, as a partnership between five local authorities, Aneurin Bevan Health Board and the voluntary sector, is reshaping services in primary and community care around the care needs of people.

But despite such examples, there is more that can be done to ensure such innovation does not remain within isolated areas across the nation but becomes a normal part of the delivery of public services in the future.

There is also the opportunity to incentivise new partners in the private sector, such as technology providers, to turn Wales into a global test bed for those wishing to develop innovative solutions via digital technologies in areas such as health and education.

This of course, will require acceptance of greater risk within the public sector where innovation and accountability can go hand in hand, and failure is an chance to learn from mistakes rather than an opportunity to apportion blame when something goes wrong. With a new Permanent Secretary who, in his public statements so far, embraces such a culture, the Welsh Government could be leading such change across the public sector in Wales.

But it is not only the public sector alone itself that can make a difference to this agenda.
For example, with the creation of a new University of South Wales, there is an opportunity for this institution, with its roots in some of our most deprived communities, to become a catalyst for change in driving forward innovation within public services in Wales, especially by making innovation skills centre stage in management and leadership programmes in order to create a new cadre of innovators across Wales’ public services.

There is also a greater role that can be played by the third sector in Wales, especially in the creation of new social enterprises that can help deliver local services around their communities in a far more efficient way than many public bodies. Indeed, could the current review of mutuals and co-operatives by the former minister Andrew Davies herald a seismic shift in the way some public services are delivered in Wales?

In 2011, the economist Gerry Holtham wrote in an article in the Western Mail that instead of bewailing the fact that our public sector is too big, why don't we make virtue of necessity? As he noted at the time, whilst industries rise and fall, there will always be a need for good government in every part of the World.
economic development innovation public sector Welsh Government