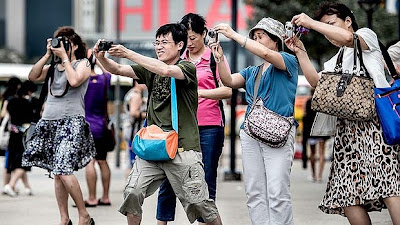 With the sun coming out more often than in recent summers, the tourism industry in North Wales must be feeling more optimistic than in previous years.

However, is it doing enough to attract the new growth sectors in tourism globally?

For example, a recent report from the UN World Tourism Organisation showed that visitors from China have become the biggest global source of tourism income in 2012, spending £67 billion whilst travelling abroad. This is 40 per cent higher than in 2011 and well ahead of both the Germans and Americans. With a growing middle class, a strong exchange rate and the lifting of travel restrictions, this trend is set to continue.

However, it would seem that the UK tourism sector may miss out on this bonanza. According to the Tourism Alliance, the number of Chinese visitors was only 179,000 in 2012, an increase of only 20 per cent and well short of the target of 201,000. This means that the aim of attracting half a million Chinese visitors to the UK by 2015 is likely to fall short by around 200,000. Indeed, if we compare the UK performance to that of other European nations, this is a worrying trend.

For example, France now receives almost eight times more visitors from China than the UK. Tourism specialists have suggested that the high costs of Air Passenger Duty and visas have been factors in disincentiving overseas tourists from coming to the UK. Indeed, in order to gain competitive advantage, the Spanish Government is now considering facilitating visa formalities for Chinese visitors to attract more in the future.

Yet, the question is whether we are doing as much as other countries to attract this growing market to our shores?

For example, the Australian tourism authority has established a network of dedicated travel agents in thirteen of China’s major cities, all of whom have had specialist training to sell Australia to potential Chinese tourists. There are also greater efforts being made within Australia to increase Chinese language and cultural awareness with tourism providers across the country.
In the USA, organisations such as Attract China help to market and promote destinations by helping tourist businesses to build an online presence that understands and embraces the Chinese lifestyle. However, Wales could be in a prime position to take advantage of this visitor boom from China for a number of reasons.

First of all, the Chinese have a very high appreciation of British culture and history, all of which are in abundance in Wales if marketed properly. In addition, outdoor pursuits such as hiking, camping and walking are favoured by many Chinese tourists, which should make North Wales a major attraction if marketed properly. The Chinese are also keen on shopping and bring home a lot of high quality souvenirs for relatives and friends when they travel abroad, thus adding value to all visits that they make. And for a Welsh tourism industry that is dependent on a period from April to September for its main income generation period, the peculiarities of the Chinese holiday regulations means that the two periods that are most favoured for travel are October and February.

In addition, they normally take a fortnight off for travel as compared to the one week favoured by American tourists. Given this, you can just imagine what a boost this could give to the Welsh tourism industry at a time of the year when our hotels and B&Bs are largely empty.

Therefore, the boom in Chinese visitors globally is something that Wales cannot ignore and it should not be beyond the imagination of those marketing our nation as a destination to link the dragons of China and Wales and thus bring a real bonanza to our tourism industry at a time when it needs it the most.
China Tourism Welsh Economy