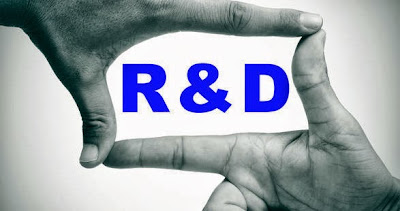 Using a complicated but impressive methodology, the study identifies the most innovative organisations in the world through a series of patent-based metrics including overall patent activity, success rate, globalisation and influence.

It is a great read in itself but perhaps the most important finding for both businesses and policymakers is that being focused on innovation does seem to have a positive effect on the performance of the business.

In spending 8.8 per cent more on research and development (R and D) than the 500 largest firms in the USA, these one hundred innovators outperformed the market in terms of simple stock price by 4 per cent over the year. In terms of other performance measures, they created 266,152 new jobs and generated £2.8 trillion in revenues – twice the annual GDP of the UK.

In terms of the industries that make up the list, the semiconductor and electronic components sector – including companies such as Corning, Intel, Sharp and Texas Instruments – continue to dominate with twenty three businesses, an increase of over a quarter on the previous year. It is followed by the computer hardware sector, which includes global giants Brother, Canon, Hewlett Packard, Hitachi and Toshiba. Interestingly, there are only three pharmaceutical businesses present, despite the recent hype over life sciences by most governments. 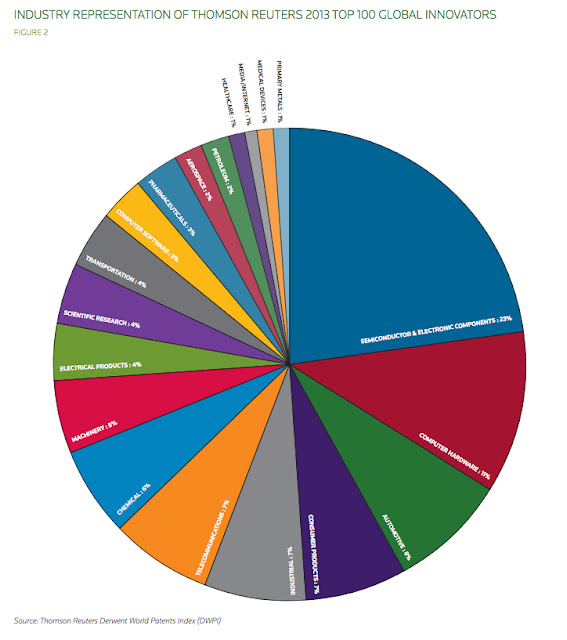 Innovation can be a driver for competition (or vice versa) and that seems to be borne out by the intense rivalry within the growing smartphone market.  Innovators such as Apple, Microsoft, Samsung, Google and BlackBerry are involved in an intensive patent war to ensure they gain the upper hand in an increasingly aggressive and intensive global battle.

And whilst Apple and Samsung continue to slug it out in courts all over the World, Microsoft quietly spent £1 Billion, as part of their acquisition of some of Nokia’s mobile phone business, to license around 30,000 patents held by the Finnish company and enable them to start taking a more competitive position in the market place.

With regard to the location of the most innovative firms, the USA is where forty-five of the top 100 Global Innovators are to be found, a trend which seems to be founded on the many pro-innovation policies that have been developed over the last fifty years. 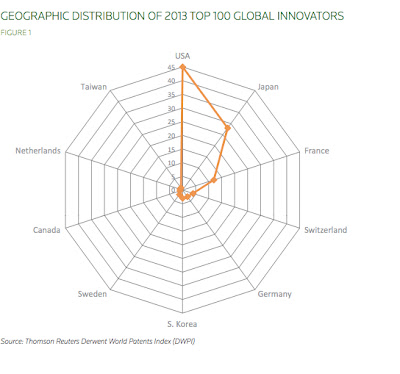 Not only does the US Government directly fund billions of dollars of research and development within businesses, they also have a tradition of R and D tax credits to encourage greater innovation and ground-breaking legislation such as the Bayh Dole Act which, over thirty years ago, opened the floodgates to increased commercialisation of intellectual property.

In more recent times, the Obama administrations have looked to build on this by encouraging greater collaboration between businesses and government, most notably through the creation of fifteen new manufacturing public-private innovation hubs across America focused on emerging technologies, from 3-D printing to genome mapping.

Whilst the Japanese economy has suffered during the last decade, it still has 28 businesses on the list, no doubt boosted by a new and more generous R and D tax credit regime along with greater incentives for links between universities and industry.

But perhaps the biggest surprise is that for the second year in succession, there are no British companies on the list. The reason for this, argue the authors, has been the trend over several years of low levels of R and D spending as a percentage of economic wealth and the evolution of the UK economy away from manufacturing and towards more services.

In contrast, our nearest neighbour France has twelve companies, including Alcatel-Lucent, L’Oreal, Michelin and Thales, in the top 100. This, according to the report, is testimony to the £30 Billion spent annually on R and D in France, a sum that is 53 per cent higher than the UK despite the fact that the French economy is only 14 per cent bigger.

Therefore, the pro-innovation R and D tax policies of the USA, Japan and France are, according to the authors of the report, having a major effect in developing and attracting innovation businesses. More importantly for these economies, over 70 per cent of R and D spending in all three countries goes into the high value added and export-oriented manufacturing intensive sectors.

To be fair on the UK Government, there have been recent incentives from the Treasury, such as the Patent Box (which aims to cut the tax on income from patented technologies). The Technology Strategy Board has developed a group of technology and innovation centres known as “Catapults” where business and academia can work together to commercialise ideas in key sectors (although there are none in Wales).

The Welsh Government has also recently launched an innovation strategy, and developments such as Ser Cymru, which last week funded a new solar energy research centre at Swansea University, are to be welcomed.

However, the fact remains that we spend far lower levels of our economic wealth on research and development, certainly compared to our competitors. Unless that changes, then it may be some time before we are perceived as a nation where innovative companies thrive.
innovation R&D