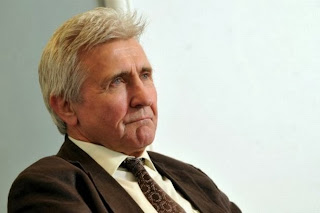 As regular readers will know, I have been a constant advocate for lower business rates for smaller businesses in Wales since I started writing my first newspaper column for the Daily Post back in 2003.

And it would seem that this vital issue is now something that has become popular again amongst politicians in Wales.

Last year, we saw the publication of a Welsh Government commissioned review, chaired by Professor Brian Morgan of Cardiff Metropolitan University (above), into whether changing the business rates regime in Wales could aid economic development.

And not to be outdone, Plaid Cymru have now made an announcement on the future of business rates in Wales at their annual conference in Aberystwyth.

They say that imitation is the sincerest form of flattery, so I am wondering how the Welsh Conservatives would have felt on hearing this announcement given that Plaid’s policy is almost identical to the one they adopted in 2010 i.e. no small business having a rateable value of less than £12,000 would pay business rates in Wales?

To be fair to Plaid Cymru, they had previously made reduction in business rates one of their seven key electoral pledges prior to the 2007 Assembly election, announcing that they had “launched proposals to take 50,000 Welsh businesses out of the business rates net. The announcement is the last of Plaid’s 7 for ‘07 policies to transform Wales. Plaid Leader, Ieuan Wyn Jones outlined proposals, targeted at the West Wales and the valleys region, that would see an immediate increase in the number of businesses entitled to 50 per cent and 25 per cent rate relief and a total of over 50,000 businesses completely leaving the business rates net by 2011.”

Yet, when Plaid Cymru became part of a coalition government between 2007 and 2011, did small firms throughout Wales finally get the business rate reductions they deserved?

Unfortunately, it was a promise they did not keep to Welsh electorate and with Scotland and England then introducing schemes that reduced their business rates, Welsh firms ended up being at an even greater disadvantage in terms of the local taxes they were paying.

And even during the dark days following the economic crash of 2008, the then leader of Plaid Cymru, in his role as the minister for economic development, steadfastly refused to consider reducing the burden on small firms, stating that he was not persuaded that business rate relief was the best use of the limited resources that the Welsh Government had.

To be fair, this antipathy towards reducing the taxation burden for Welsh small firms has not been shared across the whole of Plaid Cymru.

In fact, my fellow Daily Post columnist Lord Wigley is on record as stating that cutting business rates would enable money to be “re-circulating within the business sector, enabling it to take on more people, to set up new projects, and to have a new confidence and incentive for its work, than being gobbled up in the bottomless pit of bureaucracy, where so much of it ends up at present”.

With the weekend announcement on reducing business rates, it would seem that his influence on Plaid Cymru’s economic policies are on the increase again assuming, of course, that they actually keep to this promise if they enter the Welsh Government in 2016.

If they do, and with all the major parties in Wales now committed to reforming our business rates regime, that can only be good news for our small firm sector and, more importantly, their potential for creating wealth and employment across Wales.
Business rates Government policy Plaid Cymru