THE FUTURE OF THE WALES OFFICE 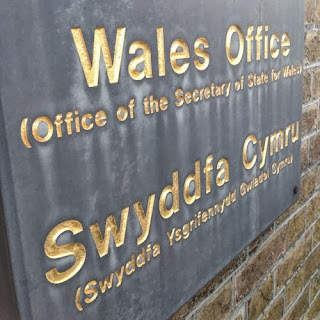 It is not often that I have used this blog for any political discussion in recent times.

When I decide to take a back seat (even temporarily), then I am someone that firmly believes that other people should be driving the car.

However, those that know me well will also know that when I feel passionately about something, then I am not one to keep quiet about it.

In an interview for ITV Wales, the leader of the Welsh Conservatives in the National Assembly yesterday called for a debate on abolishing the Wales Office. Andrew RT Davies said that creating a powerful 'Department of the Nations' could give Wales a stronger voice in Westminster than the current set-up.

As far as I am aware, this is a major policy announcement that goes to the heart of constitutional issues within the UK. Yet at no time, as a member of the Welsh Conservative Party, have I been asked for my views on this critical matter that is essentially asking for Wales' presence around the UK cabinet table to be effectively abolished.

In fact, how many of his fellow Conservative members within the National Assembly were canvassed on this vital issue before it was released to the press? And how many them actually would actually agree with this call to abolish the Wales Office?

More to the point, how does Andrew believe that by getting rid of the post of a Secretary of State who speaks for the interests of this nation within the UK Government will be of any advantage to Wales? In fact, it is a slightly bizarre claim that a new "Department of the Regions" would do more for Wales in the future when that Ministry would have to represent various parts of the devolved UK rather than just one.

As a pro-devolutionist, I am not someone within my party who has had to have a Damascean conversion to the importance of Wales having responsibility for its own future and I will continue to make the case for my own view amongst my colleagues in the party, some of whom are more sceptical than I am over this issue. However, I see no rationale whatsoever in putting forward an ill-thought out case to abolish a position that actually gives Wales a competitive advantage within Westminster, especially as other regions such as the South West of England would give their eye teeth for such influence.

Andrew may believe that the way that the Wales Office is operating is not effective or may disagree the style of the current incumbent. However, that is a discussion about process not about the actual existence of the office itself. Certainly, the timing is odd and gives the impression of a knee jerk reaction to a petty disagreement over seating arrangements at the annual conference rather than a considered review of current constitutional arrangements within the UK.

As someone who backed Andrew RT Davies for the leadership of the Welsh Conservatives and who did so publicly within my newspaper columns and on other media, this is not the type of stunt that I expected from him.  In fact, assuming that he has thought carefully about such an announcement, the only conclusion I can think of is that someone has advised him that this would give him 'credibility' with Plaid Cymru for any future negotiations for a potential coalition following the next Assembly election, especially given they are the only other political party to call for such an action.

However, if I were him, I would try and heed his own party leader's call to look outside the Cardiff Bay bubble and focus instead on his credibility with his own rank and file party members, the vast majority of whom still believe that Wales should be an integral part of the United Kingdom whether we get more powers or not.