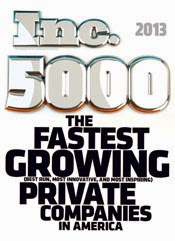 Tomorrow, we will be launching the search for the 2014 Fast Growth 50.

Now in its sixteenth year, this barometer of entrepreneurial growth in Wales will again recognise the fastest growing businesses in our economy in a special supplement to be published in the Western Mail in October.

When the Fast Growth 50  project was initiated back in 1998, it took its inspiration from a similar national initiative in the USA run by the business magazine Inc. Established in 1982, the Inc 500 was an annual list of the 500 fastest growing companies in the USA. Since then, it has expanded into the Inc 5000 which now identifies ranks the country’s top 5000 fastest-growing private companies (although it continues to feature the Inc 500 as a special ranking of the top 10 per cent of the list).

As with the Fast Growth 50 project, the Inc 5000 is ranked according to percentage growth in sales with businesses having to be U.S.-based, privately held, and independent (i.e. not subsidiaries or divisions of other companies) to qualify.

During the last sixteen years, it has been a fascinating exercise to examine this data from the USA, especially the Inc 500 and their performance as compared to the Wales Fast Growth 50 and the most recent list was no exception.

In 2013, the overall turnover of all Inc 500 firms was £8.3 billion with total employment of 44,912 people. Not surprisingly, the average turnover per business is higher than the Fast Growth 50 but that is down to the presence of a few large firms e.g. there are 23 companies in the energy turning over around £1.9 billion in 2013. However, the average number of employees per firm is approximately the same in America and Wales for these growth businesses.

As with most listings of high growth firms, the high technology sectors so beloved of policymakers do not dominate and many of the five hundred fastest growing firms in the USA are located in traditional sectors such as advertising and marketing, health, government services, consumer products and services, and financial services. There has been a similar trend in Wales with very few firms being found in 'sexy' sectors such as life sciences.

In terms of the profile of the entrepreneurs who start these growth firms, it has not changed much over the last two decades and the Inc 500 are still founded by middle-aged white males who have entrepreneurship in their blood. Many have started their first business at the age of 26, nearly half have had a parent who was an entrepreneur and a large number had worked in jobs such food service, delivering newspapers and manual labour when they were young.

Only one in ten had become entrepreneurs to make money. Indeed, the most popular reason for starting a business was that entrepreneurship suited their individual skills, followed by wanting to be their own boss and having an idea they wanted to try out.

In terms of accessing finance when they first began their now successful businesses, the most prevalent form of start-up capital were savings (71 per cent), loans from friends and family (21 per cent) and personal bank loans (13 per cent). Only 6 per cent had received venture capital which suggests that this form of equity finance is not necessarily the precursor that some consider in terms of the  success of new ventures.

Interestingly, whilst two thirds used less than £6000 to start their business, nearly half of these growth entrepreneurs considered shortage of capital to be the biggest mistake in their first year of business and only half of those questioned had actually paid themselves in the initial 12 months of their firm.

In starting and leading such entrepreneurial firms, half of the Inc 500 entrepreneurs saw their leadership style as visionary i.e. seeing the bigger picture and considered the top three traits associated with outstanding leaders as trustworthiness, sincerity and capacity to inspire.

From the point of view of helping such firms to develop further, what is particularly important is understanding the particular barriers to growth. According to these entrepreneurs, their biggest challenge was finding and keeping skilled workers. Indeed, recruiting and retaining talent is consistently seen an obstacle by growing firms including the Fast Growth 50 and yet very little is being done by support organisations to address this issue.

Therefore, what is important to remember is that projects such as the Inc 5000 and the Wales Fast Growth 50 are not just only lists of business success. They demonstrate how and where growth is happening and, more importantly, provide real life case studies of performance for other businesses to emulate. They can also give guidance to policymakers over how they should be supporting further growth in the economy.

And as we begin the search for the fastest growing Welsh firms next week, I look forward to recognising again the achievements of those businesses that make a disproportionate but lasting impact on jobs and wealth creation across Wales.
Fast Growth 50 growth firms Inc 500