FINANCE FOR SMEs - LEARNING FROM BULGARIA

During the recent Access to Finance review which I chaired for the Welsh Government, one of the more contentious issues related to whether the interest rates being charged by Finance Wales were too high and, more importantly, whether this was restricting the availability of capital to small to medium sized enterprises (SMEs) in Wales.

Certainly, plenty of strong opinions have been expressed on this issue, especially in relation to the £150million JEREMIE Fund managed by Finance Wales which is the primary mechanism used for debt and equity support for SMEs in Wales. JEREMIE is not only unique to Wales but is an initiative of the European Commission that promotes the use of financial engineering instruments to improve access to finance for SMEs via Structural Funds interventions. As a result, it is being used across Europe by various governments that are keen to support access to finance for their SMEs.

Given this, I was recently alerted by one of my academic colleagues in Bulgaria to the funding they have recently put in place for SMEs in his country through the JEREMIE initiative. The Jeremie Funds in Bulgaria are managed directly by the European Investment Fund (EIF) rather than a subsidiary of a national government as in the case of Finance Wales.

For those of you not aware of this organisation, the EIF’s central mission is to support Europe's micro, small and medium-sized businesses by helping them to access finance and, to achieve this, EIF designs and develops venture and growth capital, guarantees and microfinance instruments which specifically target this market segment.

And as a result, the mechanism for the delivery of this funding to SMEs in Wales is very different to that in Bulgaria. For example, rather than having a public organisation delivering the funding directly to businesses with all the associated overheads, the EIF has made affordable loans of up to €2 million available to Bulgarian SMEs by working in partnership with local banks such as Allianz Bank, CIBANK, First Investment Bank, ProCredit Bank, Raiffeisenbank Bulgaria, Societé  Générale Expressbank, UniCredit Bulbank and United Bulgarian Bank (UBB). 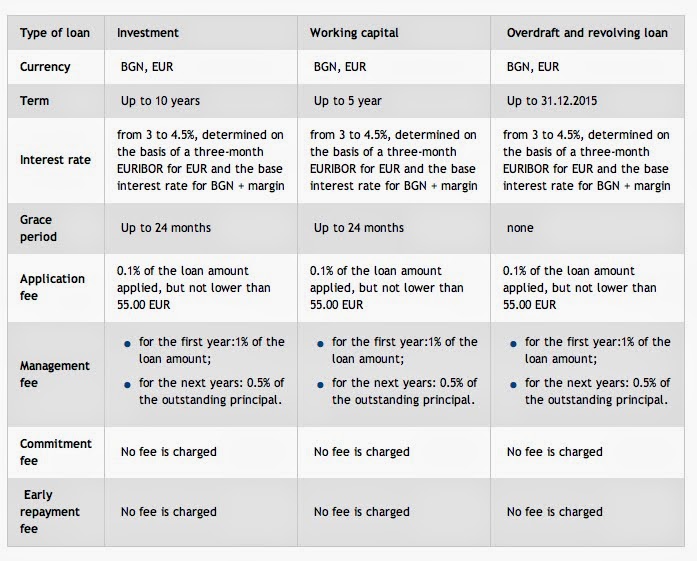 As would be expected, the loans are intended for investment under this JEREMIE programme are focused on investment but, unlike Wales, there are also programmes for providing working capital and overdrafts that are critical in supporting many SMEs.

What is also innovative is that the maximum term of the loan is ten years as compared to five years under Finance Wales. This places less pressure on businesses in terms of affordability of the loan, which was one of the key issues raised by businesses during the access to finance review and a major factor as to why some viable firms had been refused access to capital by banks.

The scheme also offers the companies a grace period of 24 months with no commitment fee and commission for early repayment. In addition, no security is required on five years loans below €30,000 and the management fee incurred varies by bank (with some charging nothing).

What seems to be important in terms of this comparison is that JEREMIE in Bulgaria has been designed specifically in response to the needs of the SME community i.e. flexible long-term affordable loans.

Not surprisingly, more half of these funds have already been taken up by businesses since the programme was started last year with nearly 1,500 SME loans given out over this period. In contrast, Finance Wales has taken four and a half years to get 73 per cent of its own JEREMIE Fund out to Welsh SMEs. It has also had to reduce its target for the number of loans given out to Welsh SMEs by 15 per cent and to extend its investment period to 30th  June 2015.

Given this, it is not surprising that Finance Wales' latest annual data shows that the total investment by its Jeremie Fund is down 9 per cent on last year and 21 per cent on 2011-12.  In addition, the numbers of firms receiving investment had also gone down by 36 per cent in the last 12 months.

Whether this difference in performance is due to the difference in interest rates across the two funds is open to further analysis but certainly the favourable borrowing terms offered the Bulgarian programme is proving attractive to SMEs.

But it is not only in mainstream loans that Bulgaria has been developing funding for its SMEs.

Since 2012, EIF has also committed to developing two accelerator funds that are focusing on supporting high-technology SMEs in their start-up phases. These funds have around £17 million committed to them for seed financing of innovative businesses and have already attracted major partners to support their efforts including Google, London-based accelerator Springboard, Seedcamp (the largest early stage microseed investment fund in Europe) and the Cisco Entrepreneur Institute. In contrast, Finance Wales will only launch its own £7.5 million fund for high technology start-ups next month.

Therefore, the case of Bulgaria shows that it is possible to offer SMEs low cost funding at below market rates within the regulations of European funding programmes, something that has failed to happen here in Wales. Whilst the context in which these funds are managed may well be different, the way in which JEREMIE funds are managed in other countries does warrant further investigation as it demonstrates how European funds can, through working with the existing banking systems, support the business community at a time when it requires appropriate funding to grow.

More importantly, it demonstrates that, contrary to opinions expressed after the publication of the Access to Finance review, low cost loans can be provided to SMEs via such programmes and with some considerable success.