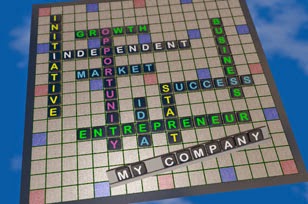 Ever since I took up my first chair in entrepreneurship at the University of Glamorgan in 1996, I have been a tireless advocate for boosting enterprise in Wales.

And as one of the team who helped to develop the world’s first regional enterprise strategy – the Entrepreneurship Action Plan (EAP) for Wales – in 2000, I believed that after years of economic decline, we were about to embark on an entrepreneurial renaissance that would transform the Welsh economy.

Unfortunately those hopes were short lived and since the demise of the EAP eight years ago in the backwash from the abolition of the Welsh development Agency, it has been disappointing to note that the Welsh economy has struggled to create the levels of start-up activity that peaked during the time when this strategy was operational.

Whilst there has been some valuable work undertaken by policymakers to try and boost enterprise, the Welsh economy has not yet attained the position which the EAP wanted, namely to be a “bold and confident nation where entrepreneurship is valued, celebrated and exercised throughout society and in the widest range of economic circumstances”.

And the latest data on entrepreneurial activity in Wales suggest that there is still some way to go until this vision is realised.

The Global Entrepreneurship Monitor (GEM) is an international project involving seventy economies that seeks to provide information on the entrepreneurial landscape of countries.
Wales has been part of this study since 2000 and, as such, it provides a very useful benchmark of where we stand against the rest of the UK, as well as other nations.

In terms of the main indicator for GEM, the rate of early-stage entrepreneurship (TEA) in Wales for 2013 was 5.4 per cent. This was significantly lower than the 7.0 per cent recorded in 2012. It was also lower than the TEA for the UK as a whole (7.3 per cent).  This suggests that whilst there was some increase in entrepreneurship following the recession, the trend seems to be reverting to the levels previously seen during the period 2004-2010.

If we examine the profile of entrepreneurs in Wales, it is worth noting that the rates of female entrepreneurship have also declined during the last year. In fact, the female TEA rate in Wales has slipped back to 4.2 per cent from a record high of 6.1 per cent in 2011. 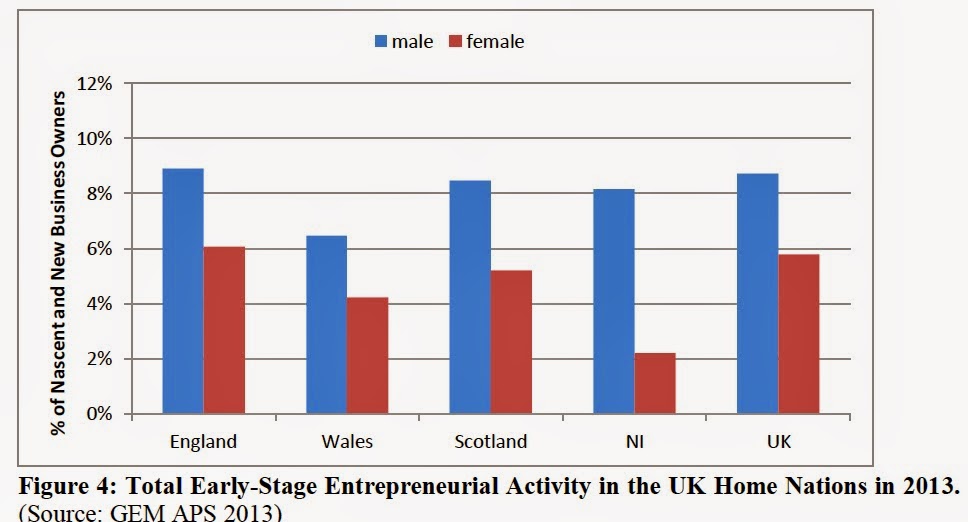 Whilst this is not significantly different from the UK estimate of 5.8 per cent, it demonstrates, yet again, that Wales is not taking full advantage of the opportunities to boost entrepreneurship amongst women.

And with women are choosing the path of creating start-ups at record rates in countries such as the USA, much remains to be done to ensure that female entrepreneurship is seen as a main route to job creation and economic growth here in Wales. 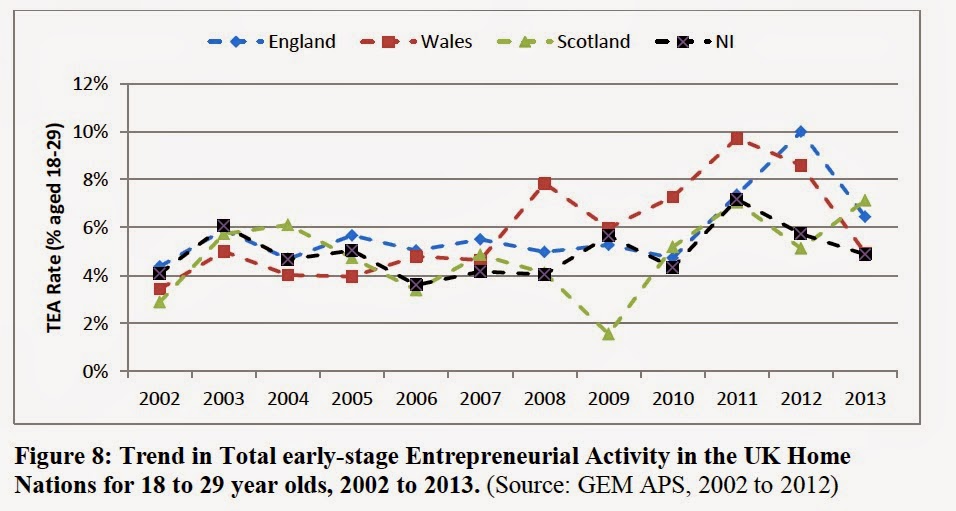 Given the specific focus by the Welsh Government on its Youth Entrepreneurship Strategy (YES) , this result was unexpected but may reflect the general decrease in entrepreneurial activity as young people move away from self-employment towards safer jobs as the recession recovers. If so, it is worrying that entrepreneurship is still not seen as viable career by 93 per cent of young people in Wales despite the best efforts of our policymakers.

However, what policymakers should be worried about going forward is that the finding that the proportion of non-entrepreneurial working age adults in Wales who expect to start a business within the next three years has fallen significantly from 8.8 per cent in 2012 to 3.9 per cent in 2013. 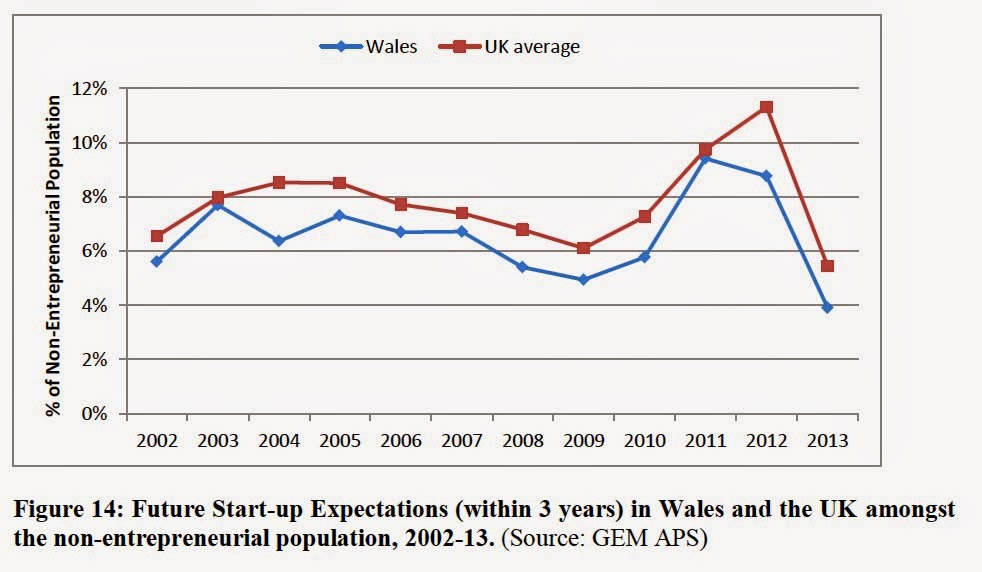 Whilst a similar decrease was experienced in the UK (11.3 per cent to 5.4 per cent), it suggests that much more needs to be done to ensure that those who wish to start a business in Wales are encouraged and supported to do so, especially given that we are in a position where the Welsh Government has a very different business support system to the rest of the UK.

Therefore, much remains to be done to ensure that Wales fulfils its entrepreneurial potential. As I discussed in this column a couple of weeks ago, the development of a strong entrepreneurial ecosystem will be vital in ensuring that we create the enterprising culture that will make a real difference to the economy.

The Welsh Government has a major role to play in this, with the potential creation of a Development Bank for Wales, considerable European Structural Funds for supporting new and existing businesses, and policies such as enterprise zones which, if managed properly, can make a major difference in driving forward this agenda.

But government cannot do it alone, and that is why it is great to see that the private sector, through developments such as the ICE project in Caerphilly, the Indycube hubs across Wales and TechHub in Swansea, is providing the support and facilities to enable entrepreneurs to start and grow their businesses.

In addition, whilst there are examples of some good practice, it is also time that all Welsh universities stepped up their game in this area and ensured that every student in Wales graduates from their degree course having had some experience of entrepreneurial learning.

The latest GEM data is a wake-up call to everyone who wants to develop entrepreneurship as a driving force for the Welsh economy. Certainly, we cannot afford to be complacent if we are to fulfil the potential that exists within our young people, and I would call on all stakeholders to work together to create a vibrant and supportive ecosystem that will transform Wales into the enterprising nation we all want it to be.
EAP Entrepreneurship GEM Global Entrepreneurship Monitor Wales Welsh Government