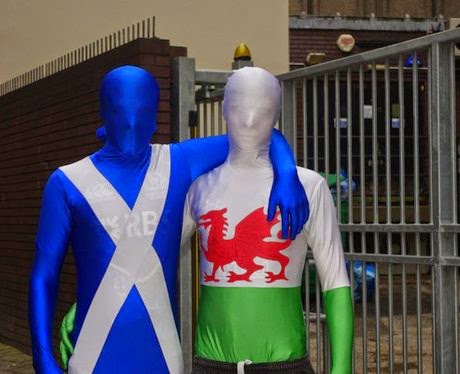 Speaking to a leading political commentator in the run-up to the Scottish independence referendum, he told me that a yes vote would probably be the easiest result to manage as a decision to within the union would no doubt create much discussion and disagreement about the future powers that should be devolved to the constituent parts of the United Kingdom.

He was proven right with the last week being a flurry of political activity in the aftermath of the vote, not least in the call for a resolution of the so-called West Lothian question to stop the current practice of non-English MPs voting on issues that have already been devolved to Wales, Scotland and Northern Ireland.

This follows a pledge by the leaders of the three main parties in Westminster to give "extensive new powers" for the Scottish Parliament whilst ensuring the continuation of the Barnett formula in deciding the amount of public funding that is received by the Edinburgh Government.

As most of you are aware, Barnett is the method by which public expenditure is distributed to the constituent countries of the UK according to their current population.

And as Professor Gerry Holtham pointed out in his seminal work for the Welsh Government, this unfortunately does not take into to account the actual needs of a country, especially one that is poorer and with an ageing population such as Wales and, as a result, we are currently losing out on around £300m a year.

In contrast, Scotland gets more than it needs. For example, it received £10,152 per head in public funding last year whereas Wales, despite being much poorer, got only £9,709.

Therefore, with the Barnett system of allocating public funding unlikely to be reformed any time soon in the wake of the Scottish independence vote, it would seem that Wales will continue to be treated unfairly, at least compared to Scotland, when it comes to the fair allocation of public funding.
So what should be done to address this?

Clearly, there is a need for Wales, as the Silk Commission has already recommended to be given tax-raising powers so that we can ensure that we raise some for the money we spent.

It may also give us the opportunity, now that I expect any lockstep to be removed, to vary rates of income tax to make Wales more competitive and attractive as no progressive economy ever grew without having some ability to raise its own money.

But we also need to ensure that government funding is fairly distributed from Westminster to Wales in a range of other areas so that if the population-based formula is to apply, we get what is due to us.

For example, we know that universities are the potential powerhouses of knowledge-based economies and that having a strong research presence not only attracts multinational businesses wanting to take advantage of such a resource but can lead to fast growing spinoffs as the world class research is commercialised.

Unfortunately, the Barnett formula, for whatever reason, does not apply to  £2.6 billion spent by the UK research councils every year. As a result, Wales, due to its smaller university sector, receives only 3 per cent of funding. This is a loss of around £50m per annum to the Welsh science base and it is something that should be addressed immediately in discussions between Welsh and UK ministers and just imagine the impact that would have if only we could get our fair share of that funding.

Similarly, Barnett does not apply to the £440 million of technology and innovation funding that is delivered via the Technology Strategy Board and again, Wales loses out on support to businesses that could make a massive difference to our economy.

Also, the UK Government has established a £10 billion business bank that is being managed from London. Not surprisingly, the Barnett formula does not apply to this new body which means that Wales, which currently gets only 3 per cent of the funding from this organisation, is potentially losing out on £200 million of capital to help our SME sector. That is critical in kickstarting the Welsh economy as businesses need access to other sources of funding at a time when, as I pointed out last week, the banks are not lending.

In fact you have to wonder why our politicians have not pushed hard for these inequalities and others to be addressed immediately if Wales is going to have a level playing field going forward and I would hope this would form an urgent part of any discussions with Westminster on any future funding settlement for Wales.

But this still does not address the annual £300m deficit from Barnett and the UK Government will have to consider carefully how it deals with this issue.

It could, for example, under a so-called Barnett Plus approach it could make an additional amount of capital funding equivalent to this amount available every year so that the deteriorating infrastructure in Wales can finally be addressed.

Alternatively it can provide the full amount of match funding needed for the next round of European Structural Funds. As the majority of these funds are geared towards ensure that the poorer parts of Wales become more prosperous, it would also target the real issue of need that the formula is addressing and is not and add real value to the Welsh economy. It could also show that the UK Government is sincere about its intentions to help spread prosperity outside of London and the South East of England.

As my namesake said fifty years ago, the times are indeed a changing but what is important that in any change, Wales is treated fairly and equitably in any agreement on the future of the United Kingdom.
That is now the challenge that faces our political leaders in both Cardiff Bay and Westminster and they must deliver.
devolution income tax Scotland Wales