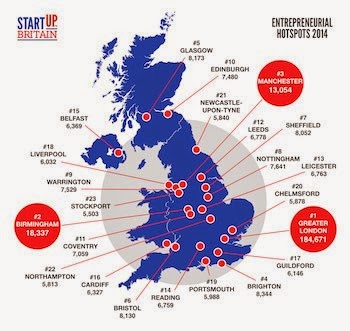 The entrepreneurial activity of a nation usually reflects its economic vitality. Certainly, a growing economy presents many opportunities for those wishing to make the plunge into being their own boss and the creation of a whole cadre of new entrepreneurial ventures can be the catalyst to driving forward economic growth. That is why the figures released earlier this week on the number of new businesses will have brought some measure of satisfaction to those running the UK economy.

According to the latest data put together by Start-Up Britain, a record 581,173 new UK firms were registered with Companies House in 2014. This represents a growth of 8% in just 12 months and beats the previous high mark of 526,446 businesses recorded the previous year. Given the high levels of economic activity in the more prosperous parts of the economy, it is not surprising that the most enterprising regions of the UK are London and the South East of England, accounting for nearly 43% of all new firms established last year.

However, this is not to say that the other parts of the UK are not performing well with the North West of England (14%) and the East Midlands (13%) showing a larger percentage increase in new firms of all of the UK regions as compared to the previous year.

And what is the situation in Wales?

Whilst it is great news that over 14,000 businesses were created in 2014, this only accounted for only 2.5% of the total of new firms for the UK as a whole. As the Welsh economy’s share of all UK businesses is around 4%, this means that we are under performing as a nation when it comes to creating new entrepreneurs. In addition, the 5% growth in the number of new businesses on 2014 (i.e. 651 additional start-ups as compared to 2013) was also considerably behind that of most other UK regions.

That is not to say that there aren’t hotspots within the Welsh economy where entrepreneurs are locating in numbers to boost the local economy. According to the data, a very small number of locations have accounted for over two-thirds of the growth in new businesses in Wales in 2014. These include Cardiff North, Pontypridd, Cardiff City Centre, Newport East and Deeside.

However, there was also disappointment to find much of rural Wales struggling as an entrepreneurial location. In addition, Swansea has also performed badly despite having tens of millions of pounds of public funding via projects such as the Techniums and the Institute of Life Sciences spent on developing new high technology firms around the university.

Certainly, the presence of organisations such as the Swansea TechHub will be vital in turning around the economy of Wales’ second city over the next few years. As this column has consistently pointed out on numerous occasions over the last 11 years, much more needs to be done to encourage and support entrepreneurship in Wales.

In particular, the public and private sectors need to work together to achieve this as the Entrepreneurship Action Plan for Wales did over a decade ago in developing the World’s first regional enterprise strategy that increased the number of new firms by 28 per cent in three years. Yet some within the start-up scene have recently been more critical of the role that the Welsh Government is playing, suggesting that enterprise support in Wales should be left purely to private investors.

That is why the latest figures on the Seed Enterprise Investment Scheme (SEIS) –where investors such as business angels get considerable tax breaks to invest in new businesses – is of interest. Unfortunately, the data shows that Wales is badly under performing in attracting private funding for new businesses with only ten Welsh firms (out of a total of 1,210 across the UK) being given a total of £400,000 under SEIS in 2012-13, the lowest of any region. In contrast, forty five firms in Scotland received a total of £2.3 million via the SEIS over the same period. 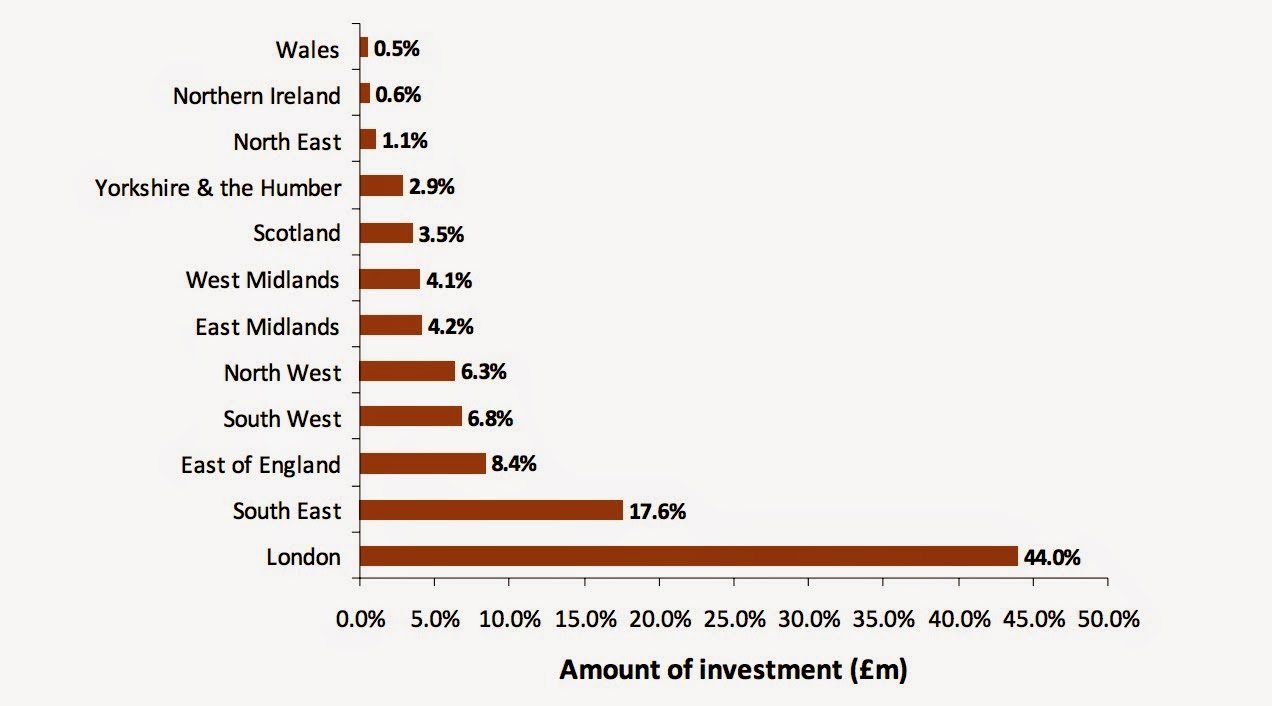 This suggests, that despite the best intentions, new firms in Wales are simply not attracting enough seed capital from private investors. Indeed, this clearly shows that more needs to be done, as the Welsh Government’s Access to Finance reviews have pointed out, to stimulate the business angel market in Wales.

Thankfully, the new Start-Up Loans programme has stepped into the breach for those seeking small amounts of funding to launch their ventures. This government-funded scheme is miles away from the previous grant driven approach to supporting those starting a new business and instead provides mentoring, advice and business loans of up to £25,000 to new firms at an extremely low interest rate of 6%, demonstrating that the cost of debt funding from public bodies to risky new firms need not be extortionate. And it has worked. Whilst it was only made available to Wales in October 2013, over £4.2m had already been drawn down by 639 new businesses since the scheme began.

Therefore, it is clear that more needs to be done to support entrepreneurship in Wales, not least in getting private investors to provide the capital to help entrepreneurs to start and grow. However, where there are clear signs of a market failure in a less competitive region, there is a role for government, through targeted interventions such as the start-up loans programme, to provide the support necessary to give new entrepreneurs the hand-up they require to get their business off the ground and, hopefully, to create jobs and prosperity in the future.
business angels start-ups Wales Welsh Economy