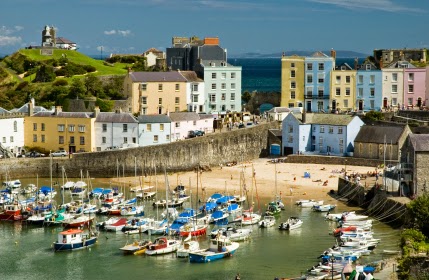 With the starting pistols finally fired on the general election campaign, there is going to be a long debate during the next few months on the economic plans of the two main parties.

There have already been discussions across the airwaves and in the newspapers as to whether there will need to be higher taxes to deal with the austerity agenda. However, is there a way for politicians, even when austerity is still dominating public policy, to examine ways in which a reduction in taxation could benefit individuals, businesses and regions?

With a higher dependency on the tourist industry than any other part of the UK, one of those tax cuts that could benefit the Welsh economy is a reduction in VAT on tourism to the low levels experienced in many other European countries. There are strict agreements within the European Union over the VAT rates governments can charge, although tourism is one of the few areas in which a reduced rate can be applied. As a result, many EU countries are currently taking advantage of this loophole. For example, Germany cut the rate of VAT on hotels from 19% to 7% in 2010.

Unfortunately, as the Cut Tourism VAT campaign supported by 43,000 businesses has pointed out, the UK is one of only four countries not to do this. As a result, the VAT on a British holiday – which includes accommodation, food and entrance to attractions – is almost three times that in France or Germany and twice as much as in Italy and Spain. According to supporters, such a targeted reduction would have a considerable impact on the Welsh economy. It could make the industry more competitive, which could then – because of increased profits – lead to further jobs and investment in the industry, thus improving the overall quality of the tourism sector.

While certain sectors such as the creative industries have been given considerable tax breaks in the last few years to boost their attractiveness, tourism has been left in the cold. Indeed, without any targeted support, it is claimed that the industry faces some major challenges over the coming year.

The continuing weakness of the euro means that while overseas holidays are becoming more attractive the reverse is true for UK holidays, both for British holidaymakers and those living in the eurozone. This has been exacerbated by the decision to scrap air passenger duty on children travelling abroad, which will help families who wish to travel overseas but not those who want to take ‘staycations’ in their own country.

So it is argued that the proposal to reduce VAT on tourism to 5% would create a more robust and competitive tourism industry, something that many have called for in recent years. For example, a study by the accountants Deloitte has forecasted that if such a reduction took place, 78,000 full-time equivalent jobs would be created in the accommodation and attractions sector. They showed that the reduction on VAT for meals in restaurants in France from 19.6% to 5.5% since July 2009 has resulted in an estimated 28,200 new jobs. In addition, 15,000 businesses have been saved from closure, safeguarding a further 30,000 jobs

Over the next couple of months there will be, as a result of the Scottish independence referendum, further debate over which fiscal and taxation powers should be devolved to Wales, Scotland and Northern Ireland. Yet by cutting VAT for tourism to 5% there would be an opportunity to boost seaside communities across the whole of the UK and make a real difference to the potential of the tourism sector. In fact, while Belfast politicians are looking to get powers for corporation tax reductions to match that of the Irish Government, the irony is that without change VAT on tourism in Northern Ireland will remain at 20% as compared to 9% in the Republic of Ireland.

So what difference has this reduction had on the Irish tourism industry since its introduction in 2011?According to a review by the Irish Government, direct tourism employment has increase by more than 20,000 since the VAT cut. And while there were fears that operators would not pass on the rate reduction to customers, the reverse has been true across nearly every type of tourism business. As a result there has been renewed and sustained growth in overseas tourism numbers and earnings, increased activity levels apparent across the industry and improved perception of value for money across all visitors.

While there have been many factors that have helped the recovery of the overall Irish economy, tourism industry representatives claim that the reduction in VAT was the most important single factor in stimulating growth in the sector. This was supposed to be a temporary reduction but its impact has persuaded the Irish Government to keep the reduction in place for the time being.

So there is a case to be made for tax incentives to support the tourism industry in the UK, and with the general election less than four months away the question many operators and businesses will ask is whether any of the political parties will have the foresight and courage to propose such a policy. Certainly, with tourism being a major industry in the Welsh economy, such a reduction in the VAT rate would have the potential to make a major impact on economic growth and employment across Wales over the next few years.
Tourism vat Welsh Economy