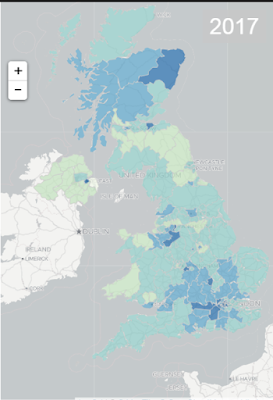 One of the big economic issues that still faces the UK as we look to leave the European Union is not related to our place in the World but, more relevantly, to the regional imbalances that exists between the different parts of Great Britain and Northern Ireland.

In particular, with recognition that there has been too much focus in recent times on London and the South East of England and increasing calls for greater devolution from new economic regions such as the Northern Powerhouse and the Midlands Engine, a recent publication on the fiscal contribution of each part of the UK makes for some fascinating reading.

Entitled “Country and regional public sector finances”, the aim of these statistics is to provide information on how much public sector expenditure - by bodies such as central government, local authorities and other public bodies - has occurred and how much revenue (mainly taxes and social contributions) has been raised in each country and region of the UK.

This also, of course, inevitably gives us some idea on which parts of the UK have a positive net fiscal balance or, to put it more crudely, are paying their way i.e. spending more than it is receiving in revenue.

Overall, the net fiscal deficit of the UK fell by £26.8 billion between 2016 and 2017 with all countries and regions seeing an improvement in their net fiscal balance over that period. the same period. That does not mean that this was spread evenly across the UK and not surprisingly perhaps, it is the three regions of London, South East England and the East of England that only had net fiscal surpluses in the financial year ending 2017 (of around £57 billion).

London has also shown the greatest improvement in net fiscal balance of £6.9 billion (£786 per head) between 2016 and 2017 (driven mainly by greater revenue in taxation and NI contributions) which suggest that the regional imbalances over economic growth has yet to take place across the UK.

Whilst London raised the most revenue per head (£16,545) in 2017 with Wales (£8,371) raising the least, the UK’s capital spent approximately the same (£12,847) as Wales did (£12623) in 2017. In fact, only Northern Ireland has a bigger gap than Wales in terms of the difference between income and expenditure by head of population. Certainly, with increased powers over taxation now being devolved to the Welsh Government, this particular situation presents key challenges to the finance minister on how best to raise more taxes without dampening economic growth.

Another major challenge for ensuring a more balanced economy is the fact that nearly half (£25 billion) of the corporation tax raised in the UK comes from companies based in London or the South East of England, suggesting that devolution of corporation tax may not have the impact on regional imbalances that some (including myself) have suggested.

In contrast, the revenue raised from VAT is more evenly distributed across the UK with approximately 15 per cent of the total was raised in London and a further 15 per cent in South East England.

Of course, the data presented in this particular study requires a more nuanced and detailed analysis, especially in examining the potential for greater devolution of both revenue and expenditure across different parts of the UK.

However, it does show that whether we like it or not, there remains an over-dependency on the economies of London and the South East of England in terms of raising public revenue within the UK.  That is something that will not be solved overnight if we are to see a greater balance within the UK economy.

But the real question may not be how we take away from the two prosperous economies currently driving our national prosperity but instead how we add enormously to the other UK nations and regions to ensure that they also have the ability to develop their full potential over the decades to come.

That, once Brexit is over, should be the next challenge for our politicians and policymakers.