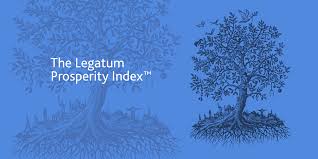 Many commentators on the economy (including myself) have a tendency to look at a nation’s prosperity predominantly though economic measures such as gross domestic product (GDP) or gross value added (GVA).

However, we are becoming increasingly aware that prosperity is not only a measure of income or wealth but is far more than that. That is why the Legatum Prosperity Index makes such thought-provoking reading as it focuses on measuring both the wealth and wellbeing of citizens across the world’s nations.

Established in 2007, this study is only a small part of the enormously rich set of data gathered by the Legatum Institute over the last eleven years from nearly 150 countries globally.

Not only does it measure important economic and business indicators (such as the openness of an economy, the entrepreneurial environment, business infrastructure, barriers to innovation and labour market flexibility) but also access to education, quality of education and human capital and a country’s performance in basic physical and mental health, health infrastructure and preventative care.

It also evaluates important political considerations such as governance, safety and security and personal freedom (such as legal rights and social tolerance) as well as social capital such as civic participation and the quality of the natural environment.

So what does this tell us about us about the global situation at a time of social, political, economic and environmental change?

The study finds that the world is actually getting better with absolute poverty falling, 113 countries improving their prosperity, greater ease in starting a business in many economies and more representation of women in national parliaments.

However, the gap between the best and worst performing nations continues to grow and there are increasing concerns about the continued decline in safety and security which is now at its worst level since the index was established eleven years ago.

There are also some fascinating results in terms of the performance of individual nations.
For example, whilst Germany ranks 12th overall for its business environment, the economic powerhouse of Europe ranks only 91st for ease of starting a business due to complex registration procedures.

In the UK – which ranks seventh overall on the prosperity index – there has been an increase in social capital (the strength of personal and social relationships, social norms and civic participation in a country) and ranks only second to Slovenia globally in terms of the natural environment. It also has the fourth best business environment after the USA, New Zealand and Canada although is ranked only 26th in the World in terms of health outcomes, health systems and illness.

Perhaps one of the most important findings from this year’s study is in terms of a greater understanding of  the main drivers of prosperity.

To do this, the report has looked in detail of those nations that have improved the most in the last decade and compared them to those that have seen their position worsen over the same period.
One of the most important conclusions is the link between prosperity and wellbeing, with those who improved their prosperity the most also seeing a rise in their citizens’ wellbeing. In contrast, those who had a decline in prosperity also saw wellbeing worsen.

Interestingly, when this is compared with traditional methods of economic output, it shows that a rise in in GDP per capita is not particularly correlated with a rise in wellbeing.

Therefore, the report not only shows clearly that prosperity is more than just wealth creation but, more importantly, reinforces the view held by many that a nation is prosperous when it has an open economy, an inclusive society, strong institutions and empowered people who are healthy, educated and safe.