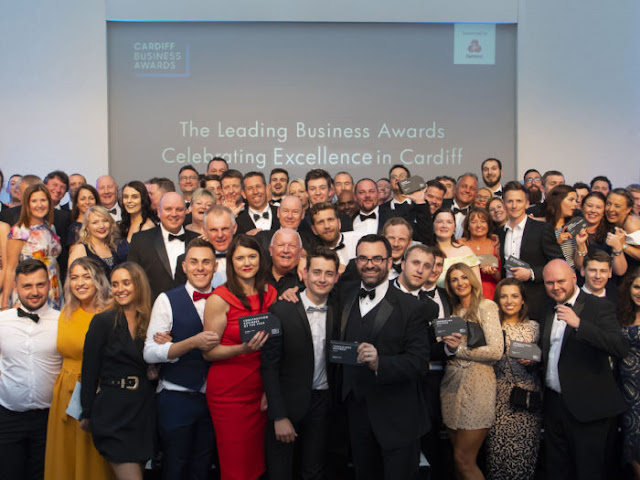 Back in November 2014, I was attending the Caerphilly Business Awards at the Bryn Meadows Golf, Hotel and Spa complex where the best of the county’s entrepreneurs and businesses were being recognised amongst their peers.

It was a brilliant evening hosted by Jamie Owen and one which brought the local business community together in a way that many other events simply fail to do.

However, the one thing that kept coming back to me as every award was being announced was the absence of similar awards for Cardiff despite the impact of the city on the Welsh economy.

So, the next day, I contacted Grapevine Events Management – which was responsible for organising the Caerphilly Awards – and suggested we should set up the Cardiff Business Awards in 2015 to recognise outstanding achievement in business and celebrate talent, ambition and innovation from across our capital city.

One of the distinguishing features of these awards, which many other competitions did not have back in 2015, is the three days of intense judging that takes place every year several weeks before the final.

I developed this process for the Cardiff Business Awards because of my prior experience with other competitions such as the Ernst and Young’s “Entrepreneur of the Year” awards where I also acted as chairman of judges for a number of years.

Then, as with most business awards, the evaluation of the entries was largely based on written applications although the judges did get the opportunity to meet informally with all the finalists prior to the final decision. It was during those conversations that we learnt so much more about those founders who had entered.

When the Cardiff Awards were set up, I wanted to take this concept to the next level and get the judges to directly listen and question all finalists.

As a result, individuals and businesses get the opportunity to pitch their business directly to the judges rather than relying only on written entries.

Yes, this process is time-consuming but it is the passion and knowledge of those applying in response to intense questioning from a group of expert judges that often makes the difference on the day in choosing the winners. It also adds enormous credibility to the awards and the decision on the winners of each category.

Fast forward to 2019 and the annual Cardiff Business Awards continue to go from strength to strength. With NatWest Cymru confirming their overall sponsorship of the event for the fifth consecutive year, the individuals and firms that are shortlisted annually have demonstrated the talent, enterprise and innovation from across all sectors of the city’s business community.

During the last four years of the awards, we have seen Cardiff transform itself into a modern city that reflects the ambitions of both its council and its businesses. A large part of the catalyst for this has been the long overdue redevelopment of the city centre into a modern environment for both new ventures and existing organisations.

The centrepiece so far has been the Central Square development outside of Cardiff Rail Station which has resulted in a set of outstanding modern buildings that includes a £120 million headquarters for BBC Cymru Wales, 130,000 sq ft office for law firm Hugh James, a new 270,000 sq ft public sector hub for HMRC, and a new location for the Cardiff School of Journalism, Media and Cultural Studies.

And on the east side of Callaghan Square, JR Smart - one of South Wales’ leading property developers - has created over 1 million sq. ft. of new office and student accommodation at its Capital Quarter for businesses as diverse as the Development Bank of Wales, Alert Logic and Public Health Wales.

But this is only the first phase of changes to the centre of Cardiff with the regeneration of the old Brains Brewery site already underway with plans for 1.5 million square feet of offices, 1,000 apartments, 50 new bars and restaurants and a new university campus. In addition, Cardiff Council announced only last month their plans for a 15,000 seat indoor arena on the site of the Red Dragon Centre in the Bay. The proposed £500m scheme would include 200,000 sq ft of retail space, 50,000 sq ft of restaurants and bars and a 350 bedroom hotel.

There are also exciting plans by to build a new railway station on the eastern side of Cardiff as part of businessman Nigel Roberts’ vision to open a business park employing 15,000 people.

But it is not all about buildings and a successful city needs to have successful businesses at its heart to succeed in an increasingly competitive global economy.

One of the best examples of a successful business is Admiral PLC – Wales’ only FT100 company and the best business to work for in the UK– which announced a profit before tax of £479 million for 2018, a record for the Cardiff headquartered insurance giant where it employs around 4,000 people.

Another major player in its sector is Bad Wolf Studios, which is quickly becoming one of the successful independent companies in the UK creative industries sector through the development of new series such as the “Discovery of Witches” for Sky TV and “His Dark Materials” for the BBC.

Innovative technology businesses such as Amplyfi, DevOps Group and Yard continue to go from strength to strength and the tech networking group Cardiff Start - which was recognised for outstanding achievement at last year’s awards – has been cited by many as one of the reasons why Cardiff is recognised as one of the growing technology start-up hotspots in the UK.

Indeed, Cardiff has an incredible entrepreneurial ecosystem which includes a steady flow of talented graduates from the University of South Wales, Cardiff University and Cardiff Metropolitan University as well as the presence of a range of incubators such as NatWest’s Entrepreneurial Spark hub, Tramshed Tech and the Barclays Eagle Lab providing space for new creative and digital companies.

The city’s existing businesses also continue to make an impact in creating both jobs and prosperity with Cardiff continuing to be the main location for the Wales Fast Growth 50 firms. Indeed, nineteen of the fastest growing firms in Wales were Cardiff-based increasing their turnover by £86 million between 2015 and 2017 (an outstanding growth rate of 228 per cent) and creating nearly 500 new jobs in the process.

Therefore, as Cardiff continues to be a magnet for investment, entrepreneurship and innovation, there is no better time to recognise the achievements of its business community and celebrate its success in making our capital city an amazing place to work and live.