IN PRAISE OF SIMON GIBSON 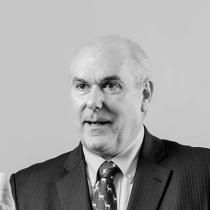 Earlier this month, I was delighted to be able to present Professor Simon Gibson as a candidate for an honorary doctorate from the University of South Wales at our December degree ceremony in Treforest.

Born in Essex but now a resident of Monmouthshire, Simon is Chief Executive of Wesley Clover Corporation, a global technology investment fund that has funded more than 150 technology start-up firms across the World.

Wesley Clover is also the owner of the Celtic Manor Resort and Golf Course - famously the home of the 2010 Ryder Cup - and the new £83 million International Convention Centre in Newport.

Before joining Wesley Clover, Simon was involved in various telecommunications businesses before becoming the co-founder, President and CEO of Ubiquity Software Corporation, a pioneer in the development of media protocols and service platforms for the internet. Amazingly, that protocol now drives every single voice phone call in the world as well as most video conference calls.

Given this, it is not surprising that he is leading efforts to ensure Wales is ahead of the game when it comes to the roll out of 5G, which is set to make mobile and wireless communications far faster than what we have now.

In particular, he believes Wales could be in a great position to show that it is a perfect, ready-made test environment for 5G networks and applications with opportunities to improve Welsh economic performance, quality of life and the connectivity of its communities.

As the founder of a number of highly successful businesses, Simon eats, drinks and breathes entrepreneurship every day.

Alacrity differs from other programmes in that rather than relying on entrepreneurs to come up with ideas, it goes to the market to identify problems that companies have and develops new businesses to solve those problems. As a result, there have been a number of innovative ventures created that all have their homes here in Wales.

He was also the founding chairman of the Wales Regional Entrepreneurship Acceleration Programme (REAP) and it was an absolute pleasure to be part of his team working in the partnership with the world’s leading university - the Massachusetts Institute of Technology - to develop the Be The Spark entrepreneurship strategy for Wales, a project which sadly lost momentum when he was replaced as its driving force.

He has been a tireless advocate for the city of Newport, home of many of his businesses and through his efforts, Wales’ third city now has a National Cyber Academy and an Executive Hospitality School at the Celtic Manor, both of which were set up with the University of South Wales, as well as a software academy with Cardiff University.

More recently, he has chaired the Newport Economic Network which has brought the private sector, public sector and education providers together to develop an exciting strategy for the city’s future.

I know from working with him closely for the last two years that as a major cheerleader for Newport, he believes there are massive opportunities to transform the city over the next decade through making it a centre for the new technological and digital skills needed by the economy of the future.

Simon was made an Officer of the Order of the British Empire (OBE) for his services to industry and to the community in South Wales in the 1999 Queen's Birthday Honours list, which was followed by a CBE for services to the economy of Wales.

According to Simon, when he got an OBE it was awarded by the Queen and his children were sitting next to Sir John Major at the investiture in Buckingham Palace.

His son Sam said to the former Prime Minister ‘My dad is going to make the Queen laugh’ and Sir John predictably said ‘probably not’. But actually he did get Her Majesty to laugh after she asked him what he did for a living and he answered by saying he was just a nerd working in a technology firm.

Fortunately for Wales, that nerd working in a technology firm continues to set up his businesses here rather than anywhere else and continues to make a significant contribution, both personally and professionally, to the Welsh economy.