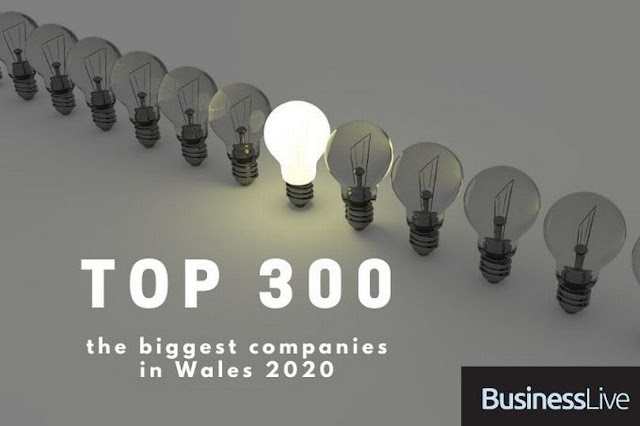 Since 2017, the South Wales Business School has been proud to support the compilation of the Wales Top 300 in partnership with Wales Online.

Utilising the latest data from Companies House, we have compiled a list of the largest Welsh businesses and examined their impact on the Welsh economy in terms of employment and sales.

Unfortunately, we have again been unable, due to corporate structures, to determine the contribution of companies such as Tata Steel, Ford, BT and Airbus, as well as major retailers such as Tesco, Asda and Sainsbury’s which are headquartered elsewhere but have a significant presence in Wales.

In addition, there is a lag in the data collected due to accountancy norms and this list certainly does not take into account the effect of Covid-19 on the Welsh economy over the last nine months.

That will be seen next year when businesses submit their accounts for 2020 and we will get a fuller picture of how the pandemic has affected turnover and jobs within the largest Welsh companies and, more relevantly, in key industries across the economy.

Nevertheless, the 2020 Top 300 demonstrates the contribution of the majority of the largest businesses in Wales to the economy and their role in creating wealth and employment across the nation.

In addition, the overall turnover of the top 300 businesses has increased by 1.7 per cent over their last 12 months of trading and employment by 1 per cent, showing a considerable decrease on the previous year’s growth of 8% in sales and 11% in employment and demonstrating that the economy in Wales was slowing down, possibly because of the uncertainties around Brexit.

Given the low productivity across the Welsh economy which is the worst performing of all the UK nations and regions, there are certainly lessons to be learnt here from the best performing Welsh businesses on how to be more effective and efficient.

By location, 59 per cent of all businesses are to be found in the Cardiff Capital region which, given ten of Wales’ local authorities are based there, is not surprising.  This is followed by North and Mid-Wales (31 per cent) and Swansea Bay City Region (10 per cent).

Given that the Cardiff Capital region has 43 per cent of Wales’ businesses, there is a clear predominance of larger firms in this part of Wales. To date, very few of these firms have been involved in the plans for implementing the City deal funds and ensuring their involvement is maximised could be the catalyst for growth over the next decade. Indeed, even a modest 5% growth per annum in turnover and employment could result in an extra £15 billion of turnover and 60,000 extra jobs by 2030.

Whilst the number of larger firms in the Swansea Bay city region has increased since last year, they are still underrepresented and whilst the focus has rightly been on developing digital infrastructure, there may also need to be an increased focus to boost the potential of those SMEs that could grow bigger  in the next few years.

For North and Mid Wales, the fact that nine of the twenty largest firms in Wales are headquartered there shows that these two regions make a significant impact on the Welsh economy with a third of all employment in the Top 300. Again, it will be critical for those managing the growth deals in North and Mid Wales respectively to ensure that those businesses play a full and vital role in supporting these economies.

In terms of sectors, many might be surprised to find that 112 firms (37 per cent) are based in non-food manufacturing with a further 18 firms involved in production in the important food and drink industry.

And with 50% of the turnover of the top 300 non-food manufacturers (or £7 billion) being derived from exports, it is clear that maintaining the international presence of these firms will be critical to Wales as the UK forges a new post-Brexit economic path.

The recent creation of Manufacturing Wales as a forum for the sector is long overdue and the opportunities for a greater focus on this sector could lead to transformational change with the right approach and support from both the UK and Welsh Governments for this vital industry.

The other two key sectors within the Wales Top 300 are wholesale and retail (39 firms) and construction (54 firms) and although the latter has experienced a 6% growth in jobs since 2019, it is the only sector that has had a fall in turnover (11%) since last year. Financial and professional services continue to be important with the largest firms employing nearly 24,000 people and over £6 billion of turnover.

Employment in the largest business to business services firms has declined slightly in the last year, the sector has demonstrated the largest significant growth in turnover (12%) in 2020.

Whilst there are only two large private sector creative firms on this year’s list, both Tinopolis and Bad Wolf demonstrate the growing importance of TV and film production to Wales by employing over 800 staff between them and increasing their turnover by an average of 30%.

Therefore, the performance of Wales Top 300 shows us not only where the economy is doing well but where there are also challenges ahead in the years to come.

As discussed earlier, the current Covid pandemic will have affected the turnover of all businesses and future analyses of the largest firms in Wales will show which sectors and regions have been hit by the largest decline in UK economic activity.

And whilst the recovery over the next few years from the downturn will certainly require the talents of entrepreneurs and innovators, there is also an important role to be played by those large businesses that form the foundation of the Welsh economy, maintaining employment across every part of Wales