Shutting the gate after the horse has bolted 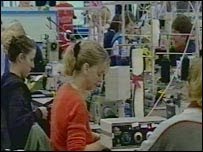 Last week, the news broke that yet another manufacturer in Wales was shedding jobs as a result of the changing nature of the marketplace.Aykroyd’s of Bala, which makes children’s nightwear, announced the loss of 66 jobs in a rural area which can ill afford to have increased unemployment.

Indeed, one could argue that the proportional impact of such an announcement in South Gwynedd is as high, if not higher, than the job losses that will come as a result of the Burberry closure in Treorchy.

Could such an announcement have been avoided? Well, it is been an open secret here in North Wales that the company has been struggling of late and, earlier this year, was forced to cut its production by almost half due to a drop in demand.

The question from the point of view of Assembly intervention is whether they had any discussions with the business when such problems were becoming apparent. Certainly, there is the impression that the Assembly only steps in after the ‘horse has bolted’ and an Assembly spokesman responded to the closures at Aykroyd by stating that "We will be seeking a meeting with the company at the earliest opportunity to discuss this announcement.

Perhaps I am being naïve here, but surely the time to seek a meeting with a company in difficulty is before they announce jobs cuts not after? Indeed, if you look at all the recent closures that have happened in Wales, which have amounted to thousands of manufacturing jobs lost in the last twelve months, the Assembly always moves in only after a restructuring or redundancy situation.

Yet, I would agree with the Wales TUC that many Welsh manufacturers, if given the right investment and training support, can survive and prosper, although it would seem that such support is only available after they have made a strategic decision to downgrade or close their operations.Clearly, there is a lack of intelligence within the Assembly Government on the current business situation of many of these businesses in Wales.

I would find it hard to believe that there is no ongoing dialogue with major employers in Wales but it would seem that every time an job loss announcement is made, our politicians seem to be caught like the proverbial rabbit in headlights with the usual reaction that ‘Team Wales’ will move in to clear up the mess.

Wouldn’t it be more sensible to set up a system where civil servants are in regular contact with the largest employers in Wales and are monitoring their current position? For example, if an American-owned medium-sized manufacturer is looking to move its operations and close down a plant in Wales, then there could be options to closure, such as a management buy out, which the business could consider.

Certainly, putting a Team Wales approach in place then, with money from Finance Wales, support from business development specialist such as GAMBIT, training grants from DELLS, grant support from the Department of Enterprise, and manufacturing advice from private sector organisations such as SA Partners, could secure jobs for the future.

At the very least, it is about time that a better relationship was built with the major employers in Wales and that an open door policy was enacted between the managing directors of these firms and senior politicians and civil servants. For example, statistics suggest that there are around 1200 firms in Wales employing more than 50 people, with a total turnover of £29 billion pounds and overall employment of 275,000 people. Now, if I was working in the Assembly, I would certainly be monitoring the health of such major employers and wealth creators in Wales and ensuring, through regular meetings, that they could get access to the support they require for their further development.

Perhaps the place to start is to undertake a baseline audit of all these businesses to determine their current situation and ensure that there will be no more job shocks in the near future. Certainly we have enough civil servants within the Assembly to undertake such an important task.

Building up a business to become a significant local employer takes many years but announcing redundancies takes less than minute, a situation that could easily be avoided if the business had alternative scenarios for its future supported proactively by business support agencies.

I certainly hope that the Assembly Government can find the resources to ensure that there are individuals that such businesses can approach immediately if major redundancies or closures are being considered, especially if routes such as succession planning or management buyouts could be utilised through greater co-operation with the private sector.