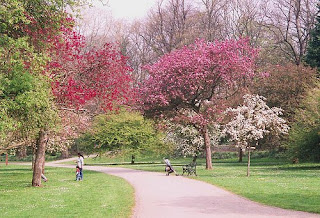 Cardiff is a capital city of which every Welsh citizen should be proud.

Not only does it have superb civic buildings, iconic world-class structures such as the Millennium Stadium and great shopping facilities, it also has some of the best parkland of any urban area in the world.

One of these iconic green areas is Bute Park.

This is an incredible creation of man-made beauty which was originally developed by the great landscape artist, Capability Brown, in the late 18th century and subsequently gifted to the people of Cardiff by the Third Marquess of Bute.

It really is something special in the midst of the noise and bustle of the youngest capital city in Europe.

Given this, you would have thought that the first priority of its guardians at Cardiff Council would be to keep the park in its original and pristine condition.

However, they have now decided, in their questionable wisdom, that instead of investing in its unique features, they intend to build a £1.4m bridge and two-lane access which will devastate one of the most beautiful and tranquil parts of the park, and bisect the pathway used by walkers and cyclists.

And the reason for this decision?

According to the council, it wants to facilitate greater ease of access for articulated lorries entering the park for concerts and events. Indeed, it would seem that at a time when the environment is one of the key themes of every development strategy globally, this green space that makes Cardiff so special is being eroded for commercial gain.

Of course, if the capital city did not already have any musical venues, then some would sympathise with improving access to an open air concert location.

However, that is clearly not the case as Cardiff has an abundance of venues, ranging from the Millennium Stadium and the CIA for stadium concerts to more intimate arenas such as the New Theatre, St David’s Hall and the Sherman Theatre. Of course, it also has the magnificent Millennium Centre and I am sure that the new Cardiff City Stadium will also look to attract musical events as part of its commercial future. Even the grounds of Cardiff Castle have attracted the likes of Tom Jones and Rod Stewart in the past.

So why do civic leaders want another temporary musical venue when there are so many?

To date, officials and councillors have ignored the need for any dialogue with those who oppose any such developments within the city centre. Not only does that suggest civic arrogance in the extreme, but it ignores the fact that their actions are undermining the very fabric of the city they were elected to serve.

At the very least, Cardiff Council should hold a wide-ranging public inquiry into the future use of the green spaces in the capital city and ensure that those council tax payers who pay their salaries are fully consulted on the matter. Indeed, if they do not, then many will believe that this is the first step in opening the floodgates for the rest of Cardiff’s parklands to be exploited for short-term financial gains.

So what can be done?

Keep an eye out for any meetings against the development by the Bute Park Alliance.

Finally, write to the BBC and get Dragon's Eye or Week In Week Out to look at this scandalous development before it is too late.

Assets such as Bute Park should not only be appreciated for their aesthetic and recreational qualities but also play a vital part in addressing issues such as the quality of air, nature conservation, recreation and health problems.

In this day and age, it is all too easy to take our public amenities too much for granted. Unfortunately, we only realise, when they are taken away from us, what we are missing and we are all the poorer for it.