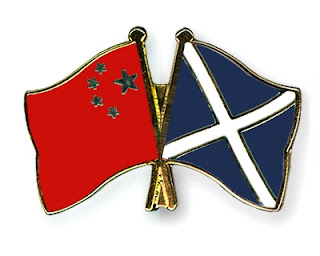 According to various press reports, several lucrative business and Government contracts are due to be signed with China this week when Li Keqiang, its vice premier, visits the UK.

Mr Li, who is widely expected to become Chinese Premier in the future, began his four-day trade mission yesterday with a trip to Scotland to hold separate talks with Alex Salmond, the First Minister, and Michael Moore, the Scottish Secretary.

He was scheduled to visit the Pelamis wave energy project in Edinburgh as much of the bilateral talks will focus on Scotland’s renewables and low-carbon energy industry. The First Minister also hosted a lavish state banquet at Edinburgh Castle, having visited China twice in each of the last two years to promote Scottish enterprise.

Mr Salmond said: “It is important the Scottish Government, our agencies, businesses and educational organisations continue to do all they can to advance our relationship with China, particularly as we pursue every opportunity to build sustainable economic growth across Scotland. I am delighted the vice premier will begin his state visit in Edinburgh. China already has the largest deployment of on-shore renewable technology and Scotland is a world leader in off-shore energy.”

Of course, the obvious question is why is Wales being excluded from the agenda for the visit by this high-powered Chinese delegation, which consists of 50 Government officials and 100 business leaders, and is viewed as important to increasing Britain’s trade with China?

Given that our export performance is the worst of all the UK regions and we have the lowest proportion of exporting businesses, surely it should be a WAG priority.

More importantly, has anybody asked why WAG is so slow off the mark when it comes to building links with the major economies of the World?

Is it because, for much of 2010, the civil service and politicians were obsessed with the internal wranglings of the now defunct International Business Wales (IBW), rather than on going out there and selling Wales to the World?

As the visit is being organised by UKTI, there is obviously an issue here regarding the relationship with the UK Government's main overseas business advocate. Surely, it isn't that difficult for WAG and UKTI to work more closely together?

Only last week, Ieuan Wyn Jones went on record to say that  “Raising the profile of Wales in the UK and overseas has been a goal and a priority of mine for some time. One of the key priorities of our new policy ‘Economic Renewal’ is making Wales a more attractive place to do business and the image and reputation of Wales is an important influence on and reflection of the business environment".

It doesn't say much for the profile of Wales in the UK and overseas when we are snubbed by one of the the most important business delegations to visit these shores in recent years.  More importantly, what efforts are being made by our civil servants to build these links with major trading partners rather than relying on spending millions of pounds on yet another trendy, visually pleasing but ultimately pointless marketing campaign?

If Alex Salmond has visited China twice in the last year, what is the record of our own First Minister in this regard? How many trade missions has the Deputy First Minister led during 2010?

Someone suggested to me recently that Welsh politicians are being told not to travel abroad because it is not "the thing to do" when public finances are under pressure. If that is the case, then someone has clearly lost the plot because of the increasing obsession by the press and some politicians over the travel expenses of those who are trying to promote our nation to the World.

Indeed, if such attitudes are prevalent within those who advise our senior politicians and prevent them from visiting key trading partners, then it is no wonder that Wales has been ignored by one of the most important trade delegations to visit these shores in recent years.