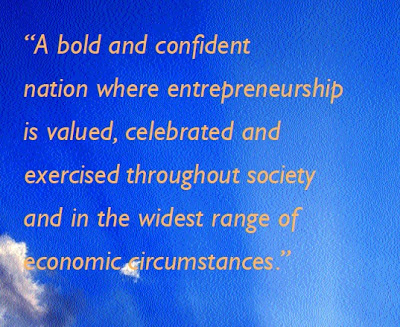 Earlier this week, I was reviewing the Entrepreneurship Action Plan that Dr Caryl Cresswell and I put together in 2000 for the Welsh Development Agency (WDA) back when we were both working at the University of Glamorgan.

It is a fascinating document, mainly because this was the first attempt, anywhere in the world, to put together a regional strategy to boost entrepreneurship at all levels of society.

It was created because, at the time, it was considered that there was an urgent need to raise the understanding of entrepreneurship and to foster a culture of creativity, opportunity and enterprise as being a positive life-option within Welsh society.

And to a large extent, it succeeded in doing this, although other influences outside of Wales also undoubtedly helped in this respect.

In all, we proposed forty-one different projects clustered around the three themes of recognising the opportunity, creating enterprises and going for growth.

And whilst the majority were implemented by the WDA, including an Enterprise Development Fund (which became Finance Wales), there were a number of projects which didn’t, although it is worth revisiting some of those to see if they can still make a difference to entrepreneurship in Wales.

The role of mentoring has now become regarded as a critical factor in supporting businesses to start and grow. In 2000, we proposed a business service whereby SMEs can access the business talent of people who have been in business (or are currently in business) and have the knowledge, skills or experience relevant to the needs of the SME. This talent can then be harnessed for short or medium term projects.

This “Business Talent Bank” could provide new businesses in particular with short or medium term opportunities to complement or supplement their staff at a cost-effective level. It would also provide opportunities for those people within a community who are otherwise unemployed, employed part-time and early retired to utilise their skills and talents, retain an interest and contact within the business community and to be employed (not necessarily on a full-time basis).

My own experiences suggest that there is still an enormous pool of talent out there that is not being used and such a programme could help in ensuring that this talent is not going to waste as well as, at the same time, helping to develop our entrepreneurial businesses.

At the time, we also felt that the insular nature of the Welsh economy and the lack of exposure of many small businesses to international opportunities was holding the economy back.

We therefore proposed a “Return to Wales” entrepreneurial programme that would attract entrepreneurs and businesspeople back to Wales to establish new businesses. It was based on the then Millennium Entrepreneur Fund run in Ireland which aimed to provide early stage seed capital funding (up to £100,000) to highly skilled individuals or teams involving a key Irish national who is willing to relocate to Ireland. The aim was to not only increase in the interest in enterprise development by businesses outside Wales but also the awareness of Wales as a nation that supports entrepreneurs.

Interestingly, the Irish have resurrected this idea with the creation of “the Gathering” which is intended to bring expatriates back to the country to help stimulate economic growth and development.

It was not only the attraction of entrepreneurs back into Wales that we considered important but how we could get our own entrepreneurs based here to interact more with international businesses.

We therefore suggested the creation of an international network structure involving Welsh entrepreneurs and those based in other countries with the aim of facilitating exposure to new experiences which would benefit their businesses.

The aim was to encourage direct contact with other enterprises (especially overseas) to widen the horizons of Welsh entrepreneurs, raise aspirations, and demonstrate examples of best practice that could be implemented at a local level. Certainly, from my own experiences of visiting hotspots such as Silicon Valley, your whole perception of your business changes significantly when one meets entrepreneurs working in such an environment.

And whilst trade missions are a useful way to build up business links, the development of ‘experience’ missions to find out what is going on in the more dynamic regions of the world could have a far larger long-term effect. Certainly, it might be something that the Welsh Government could consider as part of their overseas offering in the future.

However, the one project that I really regret never saw the light of day was the establishment of a National Business Plan Competition with local stages leading up to a final event. This would have provided a stimulus to convert interest in enterprise into action, celebrate entrepreneurship at a Wales-wide level gaining recognition, fostering the development of new business ideas, develop a “can-do” attitude and attracting potential investors for new businesses. Why it never became a runner is beyond me given the success of similar competitions elsewhere around the world but it may be an idea that could be resurrected fairly easily.

Therefore, there are still various options available from that original plan to help to boost entrepreneurship within the Welsh economy. Thirteen years later, with entrepreneurship having become more embedded in our national psyche, perhaps the time has come to revisit some of them and help to celebrate and support those entrepreneurs that create the majority of new jobs in the economy.
EAP Entrepreneurship Welsh Development Agency