THE SCOTTISH REFERENDUM AND THE IMPLICATIONS FOR THE UK ECONOMY 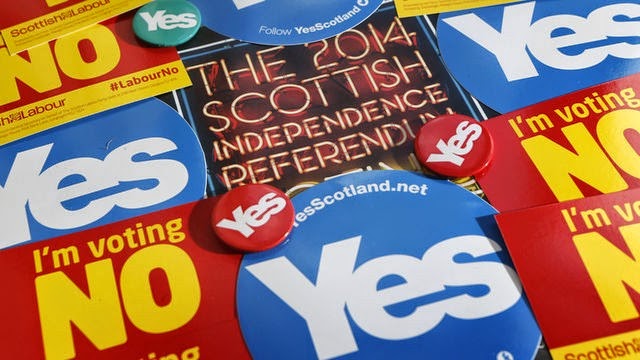 Tomorrow, the people of Scotland will vote on whether they wish to become an independent nation or remain part of the United Kingdom.

My view on the referendum is simple. This is a decision that should be left to the people of Scotland and it is not up to me, or anyone else in Wales, to tell them how to vote.

That is not to say that those I am not completely astounded at the complacency that has been shown by the UK parties over the most important referendum our economy has seen since the vote to join the European Union in 1975.

To be fair to Carwyn Jones, the First Minister has been one of the few senior politicians to call for a constitutional convention to sort out the increasing calls for greater devolved power from the various parts of the UK if Scotland chooses to remain in the UK. In addition, the Deputy Presiding Officer of the National Assembly for Wales, David Melding, must also take credit for his superb treatises on the creation of a federal Britain in previous years which policmakers across the UK will no doubt be reading avidly in the months to come.

Of course, cynics will note that during the last fifteen years of devolution, we have already had three commissions in Wales on further powers led by Lord Richard, Gerry Holtham and Paul Silk that have clearly shown the way to creating a fairer and more prosperous Welsh nation.

Yet, most of their recommendations have been put on a shelf to gather dust whilst life goes on as normal for the status quo and many will ask why it has taken a political earthquake in Scotland to shake up that complacency and, more importantly, whether there will be any meaningful change in the future beyond the usual political rhetoric?

No doubt further constitutional change will certainly be on the books if there is victory for the no campaign but what will happen to the UK economy if Scotland votes yes next week?

There will certainly be immediate consequences as markets react to such a major political event, which could result in further falls in the value of the pound, stock market volatility and a slowdown in economic growth.  In such an event, it will be vital that there is a strong and robust response to this change by not only politicians but also other key individuals within the UK economy.

A major player in this will be the Governor of the Bank of England, who was absolutely clear this week when asked about Scotland retaining the pound after independence i.e. “You only have to look across the Continent to look at what happens… A currency union is incompatible with sovereignty.”

As a result, I would fully expect the first action of the UK Government post-independence would be to firmly reject any currency union with Scotland, thus bringing stability back to sterling and showing that the rest of the UK is in control of its own fiscal destiny.

The next action would be to examine carefully how you make up for the loss of the Scottish economy.  If the chief executive of a private enterprise faced lost eight per cent of his or her firm’s turnover through the closure of one part of the business over the next few years, then he or she would focus on building up the remaining parts to ensure that its success and growth would continue.

The UK without Scotland should take the same approach and to achieve this, the political establishment needs to realise that it cannot follow the path of successive governments that have wilfully allow economic prosperity to be focused in London and South East England whilst the rest of the UK has been starved of vital investment.

As a result, it is not only Wales that has become the poorer neighbour to the capital city but also the magnificent municipalities of Manchester, Liverpool, Birmingham, Leeds, Newcastle and Bristol.
Whilst George Osborne has finally realised this with his recent plans for better infrastructure for the Northern cities, it took him until the fourth year of his tenure as Chancellor of the Exchequer to do so. Certainly, one can only hope that he will continue with such an approach and the other political parties will also develop similar policies when determining their economic manifestos for the next general election.

During the last few months, the Yes campaigners have made the case that with the right conditions and the entrepreneurial talent it has at its disposal, Scotland could become a successful economy in its own right. However, there remains enormous uncertainty over those conditions, which include retention of sterling, high oil revenues and persuading the non-Scottish firms that control more 70 per of economic output to stay, will actually be in place post- independence.

Alternatively, there is a strong argument that Scotland would be better off with greater control over its own destiny through further constitutional change whilst remaining part of the UK economy.
Making a decision on which viewpoint is the right one is a decision for the Scottish people alone and I certainly don’t envy them their task in six days time.

But whatever decision is made, this referendum has shown that our political leaders need to get out of their Westminster bubble and realise that there is an economy outside of London and the South East of England that can make a real contribution to the wealth of the nation.

And whilst our elected representatives have been largely obsessed with political devolution, the time has now come to focus instead on delivering greater economic devolution to the regions of this great nation and in doing so, ensure that there is greater prosperity across the whole of the United Kingdom, regardless of whether Scotland stays or leaves.
referendum Scotland UK economy