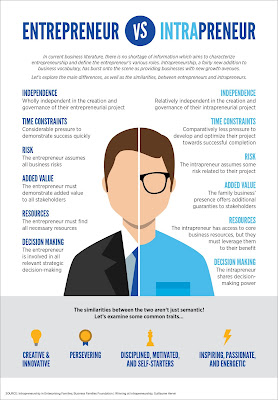 Whilst we often consider entrepreneurship to be associated predominantly with new start-ups, larger firms - in order to compete effectively in fast-changing global markets - are adopting more innovative and enterprising approaches to management within their organisations. One of these approaches is the development of entrepreneurship within a corporate environment (or intrapreneurship).

Research has shown that intrapreneurship is not easy, and there are considerable differences between an intrapreneurial and a traditional corporate culture, with the latter having an emphasis on a culture and reward system that tends to favour caution in decision-making.

For example, large businesses rarely operate on a "gut-feeling" for the market-place, as many entrepreneurs do. Instead, large amounts of data are gathered before any major business decision is made, not only for use in rational business decisions, but also for use as justification if the decision does not produce optimum results. Risky decisions are often postponed until enough hard facts can be gathered or a consultant hired to provide extra advice and information.

As a result of such a culture, large firms will often face difficulties in attracting suitably entrepreneurial staff as they will not be attracted to large organisations preferring the risk and adventure associated with ownership of a small business.

In addition, large organisations may discourage the employment and advancement of entrepreneurial individuals as the presence of entrepreneurs within a large company could possibly alienate other important managers within the organisation, especially if those individuals' career development is dependent upon conforming to the accepted structures and norms of the corporation.

Not surprisingly, the hierarchical nature of large corporations is usually not conducive to entrepreneurial behaviour, with considerable "distance" between the top layers of management and the lowest level of the workforce, resulting in an impersonal relationship between management and staff.

If a shop-floor worker in a manufacturing plant comes up with an idea to improve the production process, then the permission to develop the idea further usually comes from three or four levels of authority higher up, with each level having the potential to reject the proposal before it reaches someone with the responsibility and authority for funding.

The nature of corporate culture itself - where job descriptions are rigidly enforced - may also stifle innovation. The established procedures, reporting systems, lines of authority, and control mechanisms of a traditional hierarchical organisation are there to support the existing management structure, and not to promote creativity and innovation.

So what are a few simple things that a large organisation can do to encourage greater entrepreneurial behaviour?

Short-termism in performance standards may also adversely affect the development of intrapreneurial projects, many of which are long-term in nature.

In many large organisations, short-term profits are generally used as the main measurement of a company's success as it supports the company's share price and thus attract new investors. This will lead to pressure on managers to devise short-term strategies rather than look to long-term investment in speculative entrepreneurial activities.

Given this, an intrapreneurial climate should not be established within an organisation unless that company is willing to invest money with no expectation of return for 5 to 10 years. It is also important that ideas are allowed to develop fully, and that the resources allocated to such projects are not withdrawn before that idea has progressed to commercialisation.

As we all know, risk is often something that is inexorably linked with entrepreneurship and innovation and yet large companies, by their very nature, will be risk adverse as the concept of personal failure is anathema to the culture of traditional organisations.

To foster an intrapreneurial climate, this tolerance towards risk and failure through experimentation should be encouraged. If a large company wants to develop an entrepreneurial spirit, it has to establish an environment that allows mistakes and failures in developing new innovative ideas. While this is in direct opposition to the established promotion and career system of the traditional organisation, entrepreneurial activities within larger firms will not develop without the opportunity to fail.

Perhaps the most famous example a large organisation adopting a truly intrapreneurial approach is that of Google’s "20 percent time" where employees are given one full day per week to work on a Google-related project of their own choosing or creation.

And the results to this bold experiement have been incredible, leading to new products such AdSense, Gmail, Google Maps, Google News and Google Talk, all which have added massive real value to the bottom line of the business.

Therefore, entrepreneurship is not necessarily limited to smaller firms and, larger businesses can, with the right strategies, develop a corporate culture in which entrepreneurial individuals can develop their ideas for the benefit of the organisation and ultimately, its overall performance.