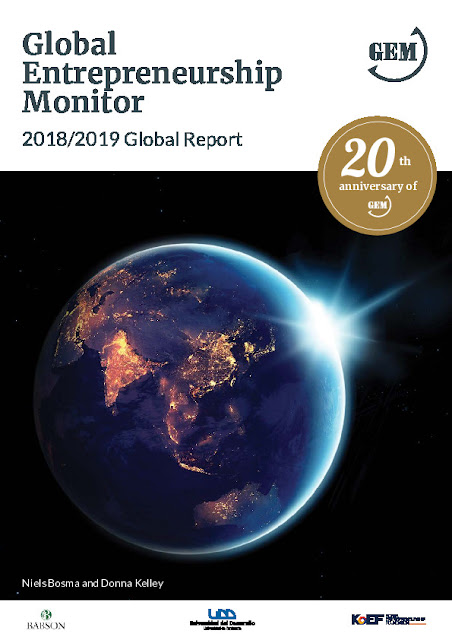 This year, the Global Entrepreneurship Monitor (GEM) celebrates 20 years of measuring entrepreneurial activity around the World.

When the first GEM report was published back in 1999 as a joint project between London Business School and Babson College in the USA, the study initially comprised data on all the G7 nations (Canada, France, Germany, Italy, Japan, UK, and USA) as well as Denmark, Finland, and Israel.
Over the next two decades, more than 100 different countries have worked with GEM to produce detailed studies on the state of entrepreneurship in their nations.

When GEM was expanded in 2000, I was honoured to be asked to lead the GEM study into Wales, a project that produced the first detailed analysis of entrepreneurship in the Welsh economy and which, for the first time, looked at key differences across a range of factors including start-up rates across the key regions of Wales, the effect of deprivation on enterprise and the first ever study on Welsh language and entrepreneurship.

Whilst I left the project ten years ago, the GEM Wales project – supported by the Welsh Government – continues to produce data that shapes enterprise policy for the Welsh nation.

So what exactly is GEM?

It was created to identify those factors that encourage or hinder entrepreneurial activity, especially related to societal values, individual attributes and other key economic and entrepreneurial conditions.

As a result, it would be able to assess the extent to which entrepreneurial activity influences socio- economic development across nations and regions and thus support policymakers in devising new ways of supporting entrepreneurs in their economies.

More importantly, using the same methodology in each country allows direct comparisons to made of the national performance in entrepreneurial activity and, more relevantly, for economies to benchmark against each other on different aspects of entrepreneurship.

One of the real strengths of GEM is that it captures both informal and formal activity, which is far more detailed than the technique of gathering information merely on business registrations.
It also identifies societal attitudes towards entrepreneurship to identify, for example, how many are thinking of starting a business, whether entrepreneurs are valued and whether a fear of failure would stop individuals from initiating a new venture.

So what does the 20th GEM report  - which surveyed 49 countries including the UK - tell us about the state of entrepreneurship around the World, particularly in terms of the effect of gender and age?
The main indicator for GEM is the total entrepreneurial activity (TEA) rate which measures the period preceding and immediately after the actual start of a firm’s life.

According to this year’s study, 12.6 per cent of all adults are involved in either starting or managing a new business although there are wide variations globally ranging from a TEA of 41 per cent in Angola to 4 per cent in Cyprus. The UK has a TEA of 8 per cent, half that of the USA (16 per cent).

The impact of gender on entrepreneurship remains a major issue across the world and there remains an imperative to get more women involved in greater economic activity, including starting a business.

Unfortunately, there are only seven female entrepreneurs for every ten male entrepreneurs with only six countries showing roughly equal proportion TEA activity between men and women. A further six countries has TEA rates for women at half that for men – Greece, Slovenia, Sweden, Switzerland, Turkey and (embarrassingly), the UK.

And as for the last years of analysis, the most prevalent age group for starting a new business in the vast majority of economies is either the 25-34 or 35-44 age range.

This is because a high proportion of these age groups will have gone to university, gained some experience and may not be wedded to a career. They are also likely to understand the latest trends and have individuals in their peer groups who are entrepreneurs.

Therefore, GEM continues to measure entrepreneurship around the World and identify those key factors that can lead to greater entrepreneurial activity.

This blog entry has only touched the surface of the vast amount of information that has been produced over the years and I would urge anyone with an interest in entrepreneurship to read their incredibly detailed analyses of one one of the main driving forces for economic prosperity around the World.