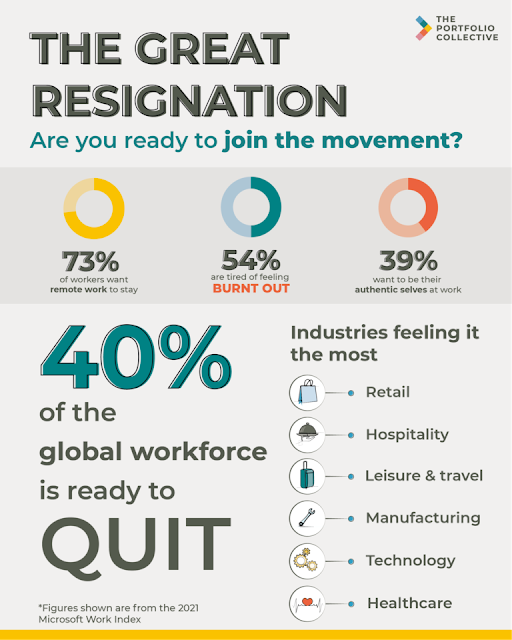 This week’s column comes from New York where I have been spending the last few days exploring the ‘city that never sleeps’.

Thanks to the pandemic, this is my first visit to the USA for a while and it has been a fascinating to experience how the country has changed and adapted to the challenges of the last two years.

Whilst the economy has recovered, the key trend has been that of the “Great Resignation” where a record number of workers have left their employers. In fact, a staggering 4.4 million Americans quit their jobs in February 2022.

Why is this happening at a time when job stability should have been a key consideration for many after a turbulent period? According to a recent survey from the Pew Research Center, workers who quit a job in 2021 did so because of low pay (63%), no opportunities for advancement (63%) and feeling disrespected at work (57%).

Also, the majority of those that left their previous employer for a new job have improved their prospects - the same survey found that over half of these workers are now earning more money, have more opportunities for advancement, have an easier time balancing work and family responsibilities, and have more flexibility to choose when they work.

Why is this happening now? It would seem that the experiences that many employees have had during the pandemic have forced them to reconsider not only their work priorities but also what is important on a personal or family level.

From reading about how different workers who had left their well paid jobs over the last year , the pandemic’s impact and isolation from the workplace has led to a re-examination of whether they really wanted to continue with their jobs or, more relevantly, to work for their current employer.

Having been forced to work from home, it would seem that an increasing number have started to consider whether there is a fit between their own values and the culture of the company they work for.

In fact, it would seem that the “Great Resignation” isn’t about not wanting to work but how the pandemic has changed the way people have thought about prioritising their own employment, personal and mental health needs. As the result, various surveys are showing that US workers want to be part of an employer culture where they are recognised, supported and given the opportunities for personal and professional growth.

Yet it would seem that many companies have not learnt these lessons. Whereas one survey showed that over half of US businesses were looking to retain talent by increasing pay, in contrast two thirds of employees would stay in their jobs if they were recognised by their boss and six out of ten would, if choosing between similar jobs, opt for the one with stronger professional development opportunities.

In other words, if businesses are not prepared to invest in their employees’ personal career development, then they will find increasing numbers of employees leaving to join organisations that will.

So why are the experiences of US businesses and workers of any significance to the UK? Despite considerable changes in the global economy, it is still the case that when America sneezes, the rest of the world catches a cold. In addition, what tends to happen in the US economy is usually replicated in other developed economies shortly after.

We have already seen growing numbers of staff shortages in key industries with record number of vacancies opening up as the UK economy recovers. However, for many organisations, retaining the best staff will be as important as attracting new talent over the next few years.

It’s just not enough to offer better salaries in isolation as the one thing that the pandemic has taught us is that work-life balance has become more important to workers in every industry. The increase in remote working has largely driven this trend and the reduction in commuting combined with increased flexibility over working hours has changed the perception of the normal working day. However, for some employees, it has also exacerbated the disconnectivity that many already felt with their managers even before the pandemic with the situation now resulting in little opportunity to discuss their needs and expectations going forward.

Therefore, as UK employers believe they are returning to normal after a turbulent period of upheaval in working practices, nothing could be further from the truth.

And if they want to minimise the impact of a “Great Resignation” on this of the Atlantic, then the key lessons from the USA is an increased focus on looking after your staff and making the most of their talents.