WHAT EMPLOYEES ARE LOOKING FOR FROM THEIR EMPLOYERS 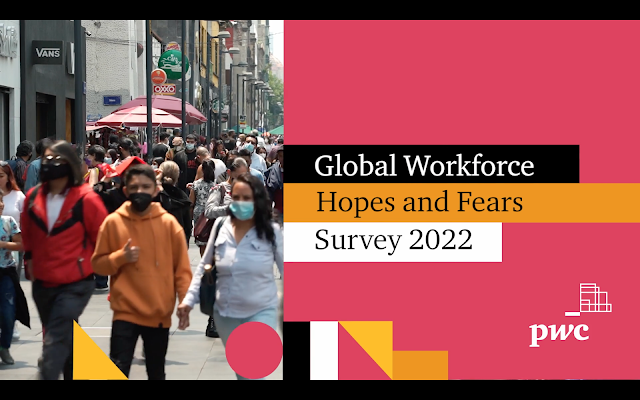 This week, we saw yet another report demonstrating that the ‘great resignation’ theme which this column has been discussing over the last six months continues to dominate the future of the workplace.

The “Global Workforce Hopes and Fears Survey 2022” from professional services firm PWC questioned over 52,000 adults who are in work or active in the labour market on a range of issues affecting their future. It found that, as with many other studies, employees are increasingly looking for new opportunities elsewhere.

According to the study - which was undertaken in 44 countries across the world -  one in five workers are likely to switch to a new employer in the near future with those aged between 18 and 41 being more likely to take that step to change their careers.

Of those who are looking for new positions, 44% are less likely to find their job fulfilling, 43% don’t believe their team cares about them, and 41% don’t feel that their manager listens to them.

More relevantly, these three factors, in addition to being fairly rewarded for the job, are the main characteristics that employees are looking for from their position at work.

This suggests that some organisations have not only failed to grasp the importance of looking after employees, but there is now a cadre of managers who seem unable to relate to the needs of those who work with them or to take positive action to address this.

There also continues to be considerable gender differences within the workplace, with women being less likely than men to feel satisfied with pay, to ask for a raise or promotion or to feel listened to by their managers.

This demonstrates not only that glass ceilings remain in place in a significant number of organisations but that a re-examination of organisational cultures which disadvantages female employees is urgently required. It also suggests that those employers with more proactive gender policies may attract the best women employees in the future.

As we know, the global pandemic has forever changed where and how employees will work over the next few years. Despite the protestations of some UK Government ministers, it would seem hybrid work is here to stay with only 11% preferring full-time in person working and 26% opting for full time remote working. In contrast, two thirds of employees stated that they prefer a mix of both styles of working and expected their employers to provide the necessary means to enable this hybrid approach.

In terms of their future within the workplace, younger workers are more concerned than other age groups about whether they will be in employment in the future. Four out of ten Generation Z workers aged 18-25 years expressed concern that not only will their role eventually be replaced by technology but that they are not getting sufficient training in digital and technology skills from their employer to deal with this change.

In fact, only 40% of employees are investing in upskilling which is a worrying trend given that various research studies have shown that most roles are changing within the workplace with all industries needing to embrace digital competences to remain competitive.

And those with specialised skills seem to gain an advantage in the workplace with half of respondents who say that their job requires specialised training not only being more likely to ask for a promotion but state that they will recommend their employer as a good place to work. The latter finding should not be surprising given that workers with scarce skills are more likely get better pay and to be supported by their managers.

There are also other factors that are coming into play when workers look at how their employers play a wider role in the economy and society.

For example, only half of those employees questioned are confident their employers are transparent about their effect on the economy, addressing diversity and inclusion, and their impact on climate change. Again, this could have an impact on any future recruitment and retention strategy given that workers are increasingly vocal about these issues and how their employers should be responding.

Therefore, this report from PWC reinforces many other studies which have demonstrated that despite the ‘great resignation’, some employers have yet to seriously consider the way that the Covid-19 pandemic has changed working patterns across the World.

With specialised skills now being recognised as one of the key competitive advantages in all industries, there has been a shift in power away from employers towards employees which have those skills. As a result, those organisations that do not look after their workers and fail to give any attention to the fulfilment they need from their jobs will pay the price over the long term. They will not only lose their best people but will be in danger of being unable to attract the right calibre of replacement staff within such a culture.

However, for those that do look after their talent and are able to utilise it for future growth, then they will be in the best place possible to grow their business over the next decade.