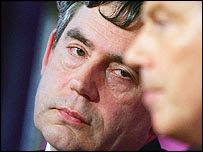 The latest poll, this time in the Observer, shows that the Conservatives are maintaining a healthy lead over Labour.

Ironically, whilst an increasing number of people believe that the UK is merging from recession, this is not benefiting the incumbent at No 10, who is getting blamed for getting us into the mess in the first place. This mirrors the 1997 election when John major's Government, despite improvements in the UK's economic fortunes, lost heavily.

So what would such a poll mean for Wales if a general election was held immediately? As it is the silly season for another week, I put the latest poll through Martin Baxter's electoral calculus. The results were:

That would be a seismic shift in the politics of Wales with even safe Labour seats such as Newport East changing hands.

Whether that will happen depends, of course, on a variety of factors including voter turnout by Labour, hardwork on the ground by local Conservatives and the status of the incumbent MP (e.g. Lembit Opik).

Still, with the general election only nine months away, we don't have long to wait.