PRIORITISING RESEARCH AND INNOVATION IN DEVELOPING THE POST-COVID ECONOMY. 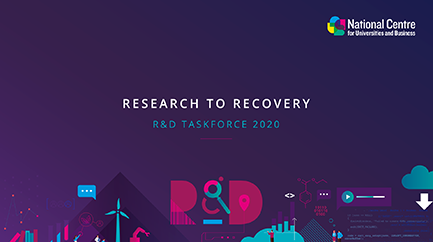 Yesterday morning, I listened to a webinar launching a new report by the National Centre for Universities and Businesses (NCUB) which focused on how the power of research and innovation could be harnessed to develop the UK economy.

With speakers including Anne Glover (co-founder of venture capitalists Amadeus), Lord Bilamoria (President of the CBI) and Louise Richardson (Vice Chancellor of  Oxford University), the hour and half was a tour de force on how the UK can develop a policy approach that will not only help us to recover from the Covid-19 pandemic but also on how universities and businesses can work together to seize the opportunities of the fourth industrial revolution.

The report itself made a series of recommendations which need to be taken seriously by the UK Government over the next few months. Not surprisingly perhaps, one of the key proposals was for the refreshment of its Industrial Strategy which, given that it was published in 2017, may not be fit for purpose and certainly, given the current administration’s new priority on boosting research and development (R&D) over the decade, business R&D and innovation needs to become a critical driver of competitiveness.

In terms of the Welsh economy, there is certainly scope, within the ‘levelling’ up agenda that is being promoted by both the Prime Minister and the Chancellor of the Exchequer, for the Welsh economy to benefit from the other recommendations.

For example, greater synergies between the components of the research and innovation system could lead to a more joined up approach between UK bodies such as the research councils and Innovate UK and the devolved administrations. Certainly, with Wales not getting anywhere near its fair share of funding from both bodies, this could help provide a more joined up fiscal approach to supporting Welsh businesses and universities.

There is also the recommendation that the UK Government should set up a national network of Innovation Collaboration Zones across the UK aligned to commercial missions with the aim of galvanising industry and academia around specific, defined commercial challenges. These would leverage all R&D and innovation drivers, from tax incentives and deregulation of land use, through to co-location of expertise and research facilities, to deliver the commercial missions from research through to development and innovation.

For Wales, there may be exciting opportunities to identify key areas as candidates for these zones including energy in North Wales, agri-food in mid-Wales and further development of compound semiconductors in South Wales.

Another key challenge is the development of a stronger infrastructure and a larger, more adaptable and more diverse R&D workforce that will support increased research, development and innovation activities. Part of that involves greater investment in fundamental research and given Welsh universities receive less money proportionately than those in other parts of the UK, a strong case must be made to ensure that areas of research strength attract levels of funding that enables Wales to develop the science that can be commercialised in the future. In terms of skills which is a devolved matter, it is critical that the Welsh Government works closely with the new Office for Talent based in No 10 Downing Street to ensure that it can get the necessary support to develop, upskill, retain and retrain Welsh talent in R&D, especially in attracting  people of all backgrounds and experience into research careers.

The Welsh Government must also work closely with the UK Government in developing and developing a comprehensive foreign direct investment strategy for R&D that not only retains retain existing business investment but attracts higher levels of globally mobile business research. This means that universities and businesses in Wales must fully engage with a proposed Global Collaboration Fund that would be created to attract inward investment. In the past, there has been a reluctance for Welsh academics and entrepreneurs to become involved in UK wide initiatives and this could be an opportunity to use this new mechanism to benefit the Welsh economy.

Finally, there is a call for a fund to promote entrepreneurship, similar to the EXIST programme from Germany, which will remove the major barrier of financial risk for entrepreneurs by providing  grants to students, graduates and scientists from universities and other institutions of research who want to start up a new business. The grants last for one year and cover both subsistence and a level of material expenses with the university provide a mentor and the infrastructure to help establish the start-up over the course of the year.

Again, this could be taken forward almost immediately by the Welsh Government (or the various City and Growth Deal) especially given that Wales already is seen as the most successful part of the UK in starting new graduate firms.

Therefore, the NCUB’s report gives considerable food for thought for Welsh universities and businesses in how they can be supported to develop greater innovation to support the economy.

However, it is critical that the Welsh Government ensures, at the highest levels, that we are not only at the top table when decisions are made on the implementation of such a programme, but that we get the fair level of funding that is critical for our institutions and companies to make a real difference to the Welsh economy.